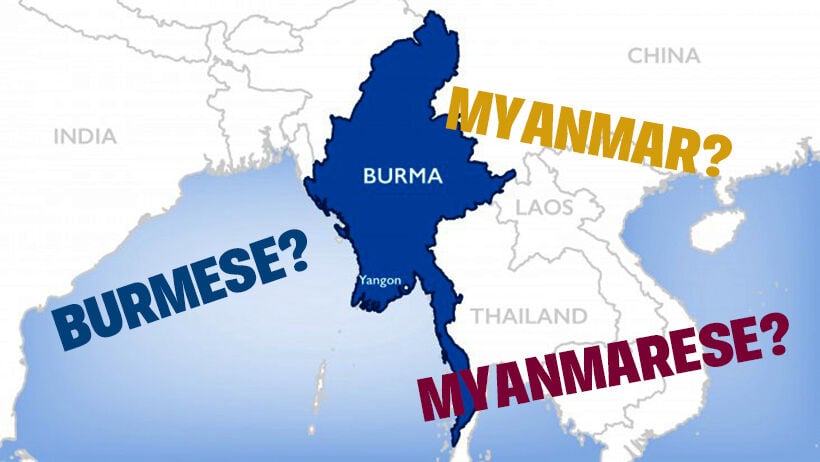 We refer to Myanmar a lot in our news because it’s a bordering foreign country to Thailand and many people from Myanmar work in and around Thailand. It’s also subject of an ongoing coup after the Burmese military staged a coup on February 1, 2021.

But is it Myanmar or Burma? And are the people that live there Myanmarese or Burmese?

As you’ll read across the media there is no precise answer to the question with foreign powers still referring to the country with both names.

But even in Myanmar locals continue to use both names.

All this confusion leads to sentences like this from Brittanica.com, explaining what language is spoken in Myanmar…

“Burmese language, also called Myanmar, the official language of Myanmar (Burma), spoken as a native language by the majority of Burmans and as a second language by most native speakers of other languages in the country.”

At The Thaiger we’ve decided to refer to the country as ‘Myanmar’ and the people as ‘Burmese’. Burmese is also used as a general adjective as in “Thai/Burmese border” or “Burmese Military”.

Reading ‘a man from Myanmar’ is a lot more cumbersome than ‘a Burmese man’. But for the country name we’re following the trend of most regional media using the official name Myanmar. Still, even the people living there continue to refer to themselves as Burmese.

In reality, Myanmar is a country of many ethnicities and tribes, making it historically difficult to govern. Wikipedia perhaps sums up the situation well… “the country has been engrossed in rampant ethnic strife and its myriad ethnic groups have been involved in one of the world’s longest-running ongoing civil wars.”

Other publications have taken different decisions and that’s fine too. Here’s some information from The Culture Trip which provides a bit of background as to why our neighbouring country to the west of Thailand lives on with two names and plenty of confusion.

Cabra
Burma, but then I still call HCMC Saigon 😉

Noble_Design
All the names are just an iteration of Bamar - the original inhabitant of current day Myanmar. The Thais call them Phama, the British colonialists call them Burma and the nationalists in an attempt to discard any remnants of colonialism…
Cathat
i asked a local guy that i used to work with about this as i noticed aunty beeb had a habit of still using what i considered an abriviated version of the old colonial name when referring to the country…
Mopi
Went we start asking the Germans what we should call Germany then it's time to as the folks in Burma what we should call them.
Guevara
So when am I likely to return to Siam safely? 555