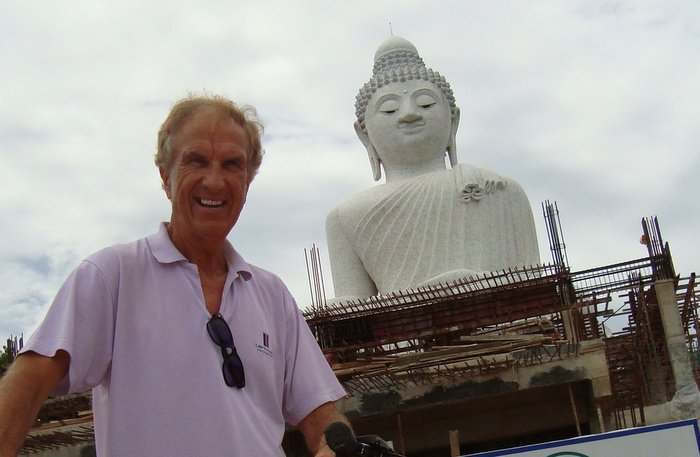 PHUKET: Since the Mingmongkol Buddha was completed on top of Phuket’s Nakkerd Hills in 2010, I’ve felt the spiritual presence of the Gautama watching over me.

That may sound rather outlandish, but as I can look westward and see the Buddha from my back bedroom window, it also has some rational underpinning. I particularly feel the Buddha watching whenever I set out for my regular bike rides along Wiset Road and down to Nai Harn and I usually offer up a silent prayer of thanks to the presence each time I come home unscathed from Phuket’s maniacal roads.

Therefore, I thought it was only right that I cycle up to see the Buddha at sunrise one morning to offer a proper propitiation of gratitude for looking after me, and I chose the morning of August 31 to do so.

This auspicious day was that of the full moon and so I anticipated seeing Buddha, sun and moon in one breathtaking landscape at dawn.

Sunrise was scheduled for 6:19 am and so I figured I needed to allow about 90 minutes to cycle up there from Chalong. So a start at 5am seemed about right, meaning getting up at 4:15 am (the things I do for you my loyal readers!)

The Phra Puttamingmongkol Akenakkiri Buddha, or Mingmongkol Buddha for short, was conceptualized over ten years ago, as Phuketians wanted to create something worthy enough to pay homage to HM King Bhumibol Adulyadej on his 80th birthday.

It is a fitting tribute as the statue prominently overlooks the island all the while exciting a sense of humility. The monument was not created with the objective of making another tourist attraction, or even with the more admirable purpose of creating a noteworthy landmark; this structure is a symbol of pride and respect to both the Buddhist and non-Buddhist Thai people, as well as showing reverence for HM The King.

Starting to cycle up to see the Buddha before sunrise is also a good idea in order to beat the twin Phuket cycling demons of heat and traffic. The road to the top twists and turns and features some pretty stiff sections of incline, so nullifying those demons is particularly worthwhile.

I set off from the main road in Rawai in the still darkness after devouring a handful of fruit and easily made it through the notorious Chalong circle, which was deserted except for a couple of teetering and laughing ladyboys on a scooter, who were presumably still on their way home from a riotous night in Patong.

Then I rode along Chao Fah West Road for a kilometer to the traffic lights and to the prominent signs announcing the road to the Buddha itself. The first couple of kilometers are just a slight incline taking you past one of Phuket’s two Bird Parks, but then the twisting road starts to ascend with a vengeance and continues to ascend as it snakes and weaves its way up the hills.

As you reach the upper parts of the climb, you’ll be rewarded by gorgeous views of Chalong Bay and out across Phang Nga Bay, as well as Phuket Town and Rang Hill to the east. The Buddha faces this way to greet the rising sun each morning, and so did I as I breasted the final ascent into the car park at the base of the huge concrete plinth upon which the Gautama sits.

Reaching an astonishing 45 meters in height and expanding to 26 meters in width at its base, the Big Buddha literally dwarfs Hong Kong’s famous Lantau Island monument, the previous record holder for the world’s tallest outdoor Buddha.

Close up to the image itself, it was very peaceful at this time in the morning and the only noises I could hear were the tinkling of small bells and the yellow Buddhist flags flapping in the wind.

The whole body is constructed of reinforced concrete layered with beautiful Burmese white jade marble that glinted in the sun’s first rays, making it a natural symbol of hope. The views, and the actual image itself, are breathtaking.

There is a smaller Buddha statue positioned nearby which is gold in color, though actually made of brass.

Undoubtedly the Buddha’s essence is one of pure calm, stillness and equanimity and, at sunrise, the lone cyclist can be infused by these rewarding virtues.

Sad to say that once the Buddha opens to the public at 8am the area is turned into a complete nightmare of building construction, earth-moving trucks, dust, heat pollution and ubiquitous tour buses sending their crowds swarming in every direction.

One can only hope that final construction will be completed very soon and that peace and quietude befitting the Buddha’s presence is returned to this lovely hilltop.

Law and Order: Evicting a Tenant in Thailand