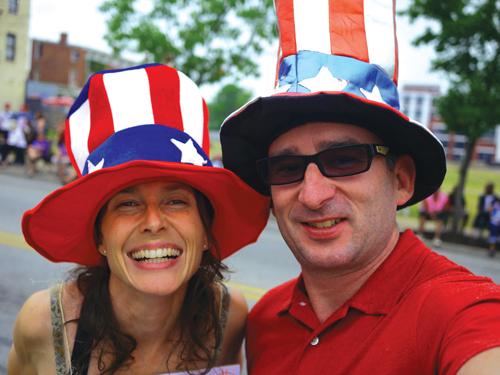 PHUKET: The Navy League Phuket (NLP) is pulling out all the stops in preparation for this year’s American Independence Day weekend celebrations, with a family picnic, live music and the grandest of air-shows on the cards.

To celebrate the USA’s 237th birthday, the NLP will stage an unprecedented extravaganza in a carnival-like format on July 6 and 7 at the expansive Phuket Airpark in Pa Klok, Thalang.

Headlining the itinerary will be an air show – the first of its kind in Phuket – that will feature aerobatic planes, hot-air balloons and a death-defying skydiving stunt, among other aviation spectacles never-before-seen on or over the island.

Other free-of-charge activities planned include ATV riding; swimming and kayaking on the on-site lake; and an array of games and contests. Those wishing to see Phuket from on high, can buy tickets for hot-air balloon and airplane rides.

“By far, this will be the biggest American Independence Day celebration that we’ve ever had here in Phuket,” says NLP President Pat James.

In previous years, the NLP’s Independence Day festivities in Phuket have been limited to small-scale, single-day family picnics.

“We’re quite excited about this year, which happens to mark the 180th year of Thailand-USA relations,” he added.

Thai-American relations were officially kick-started in 1833, with the signing of the Treaty of Amity and Commerce, a document that, to this day, still provides nationals from both countries special privileges in the other’s jurisdiction.

And what American picnic would be complete without authentic American food and beer? Living up to the spirit of the occasion, participants can look forward to a live jazz band, fireworks, and an all-American chilli cook-off, with food and drinks to be served on a pay-as-you-go basis throughout the festival.

This and much more will be on offer during the two-day event, with activities starting at 10am and running well into the night on both days.

All are welcome – Thai, American, and anyone else wishing to join in the festivities.

About the Navy League Phuket

The Navy League Phuket is a local group (officially named Thailand Southern Seaboard Council) which is part of the larger Navy League of the United States.

This organization was founded in the United States in 1906 with the support of then-President Teddy Roosevelt to provide assistance to men and women serving at sea on US military and merchant ships.

The NLP is a non-profit organization with membership open to all nationalities. In fact, 90 per cent of current members are not even American and none are active duty servicemen, in order to avoid any conflicts of interest.

The NLP plays an important role with US Navy ships when they make a rest stop in Phuket during what is often an eight-month deployment away from their home ports in the US. The NLP assists in many ways, such as providing all visiting sailors and Marines with maps of Phuket along with suggestions of what to see and where to go.

Additionally, the NLP arranges Community Service projects (COMSERV) and coordinates the placement of 20 to 40 members of a visiting ship’s crew side-by-side with local Navy League members and other community volunteers to help with various community improvement projects.

These have included such things as rebuilding a school playground; painting a wall at an orphanage; reinforcing a stream bank against erosion, and repairing much needed hospital equipment.

When a large ship such as an aircraft carrier arrives here, the NLP may complete 10 or 12 such projects. To date, Navy League COMSERV guru Brad Kenny has successfully initiated more than 100 projects that have required many thousands of volunteer-donated man-hours, all for the greater Phuket community.

The NLP are the organizers of this year’s American Independence Day weekend event. Primary sponsors include the US Embassy, Bangkok; the American Chamber of Commerce (AMCHAM); and the Phuket Gazette as media partners. Full details of the event, along with information on Navy ship tours and festival sponsorships, are available on the NLP website (click here).

Keep checking our Phuket Lifestyle and events calendar pages for the latest happenings across the island. Join our Facebook fan page or follow us at @PhuketGazette .

Pirates of the Andaman