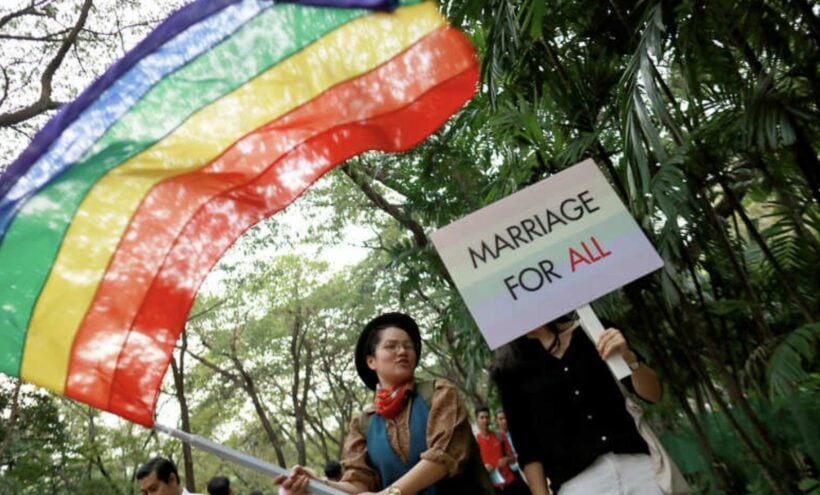 NOTE: Yesterday, The Thaiger referred to the bill as allowing “same sex marriage”. Our headline was incorrect. We have corrected the story with updated information. We apologise for the error.

The Thai cabinet yesterday endorsed a bill allowing registration of same-sex couples, as well as legal amendments to ensure same-sex couples have the same rights and privileges as opposite-sex couples. The bill and the amendment will now be put to a vote in the Thai parliament.

The government’s deputy spokeswoman says the new Civil Partnership Bill and the amendment to the Civil and Commercial Code will “ensure fairness for people of all gender identification”. The bill defines civil partners as couples born with the same sex. Marriage registration will be available to consenting same-sex couples who are at least 17 years old. One or both must be Thai.

“The Civil Partnership Bill is a milestone for Thai society in promoting equality among people of all genders… This strengthens the families of people with sexual diversity and is appropriate for the present social circumstances.”

But the bill is already coming under heavy criticism. A “No to Civil Partnership Bill” hashtag is trending on Thai social media saying the new bill isn’t equivalent to marriage. They point out that the bill doesn’t ensure the same rights as those enjoyed by heterosexual married couples, and it doesn’t recognise engagement of same sex couples.

Minors who seek such civil partnership certification must have the consent of their parents, legal guardians or a court.

Spouses of civil partners will have the same legal rights as married husbands and wives, notably including with regard to personal and jointly-held property. Civil partners can adopt a child, or a partner can adopt an adoptive child of a spouse. When a partner dies, the survivor will have the same inheritance rights as conventional married couples under the Civil and Commercial Code. Sections of the code concerning married couples will also apply to civil partners.

Some of the key points of the Bill include…

The Justice Ministry, which proposed the bill and the legal amendments, will monitor the effectiveness of the changes and plan other legal amendments to ensure compliance with those already enacted.