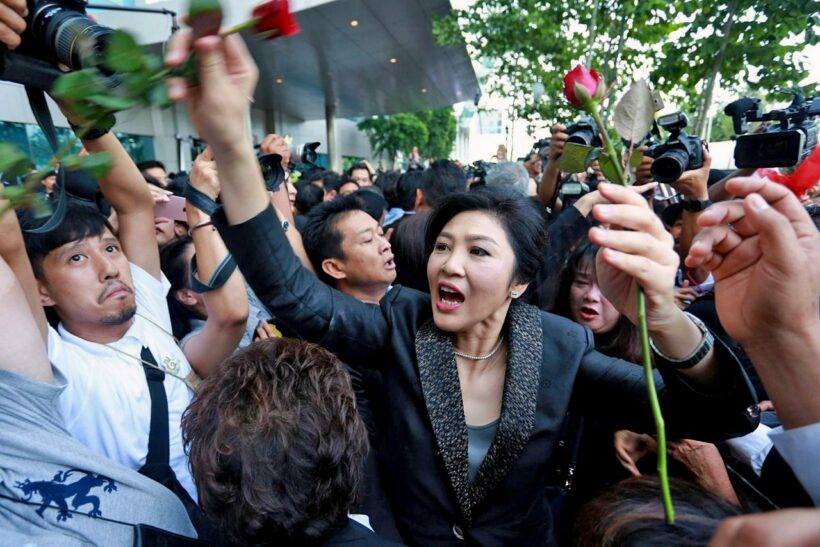 Latest from The Nation

Fugitive former PM Yingluck Shinawatra is considering applying for political asylum in the United Kingdom, Germany or France, a source from her legal team said yesterday.

The preference is UK, where she is now residing on a tourist visa, the source said, but declined to elaborate which passport she is using.

The source said the UK is her favoured choice because her brother Thaksin, who is living in exile in Dubai, has a residence there.

“Khun Yingluck is fine. She enjoys cooking Thai food with close friends who visit her. But she will remain silent for a while,” the source said.

The Supreme Court’s Criminal Division for Political Office Holders last month sentenced Yingluck to five years in jail for negligence in preventing corruption and irregularities in her government’s rice-pledging scheme. She fled Thailand in late August to Dubai and London prior to the original scheduled reading of the verdict on August 25.

She is now in the process of preparing an asylum application but first needs a full version of the court verdict to support her case. Her legal team will use the detailed verdict to justify her application for asylum status.

“We need to prove that Yingluck is being politically bullied,” said the source who spoke on condition of anonymity. “It’s not safe for her to stay in Thailand. We will tell [the country she will apply to] that she has faced an unfair justice system since her government was toppled in a coup and she had to flee the country,” the source said.

It is not easy to obtain political asylum status in the UK. Most applications are rejected due to a strict and complicated screening and placement system, with only 28 per cent of all requests approved last year, according to experts familiar with the process in that country.

According to the UK-based Refugee Council charity, 12,688 asylum applications were made to the British government from January to August this year, 10,836 decisions were finalised with 3,731 approvals for refugee status, humanitarian protection, discretionary leave and other grants. The rest, or 7,105 requests, were turned down.

If Yingluck is seeking asylum in the UK, an application can be made immediately upon arrival in the UK, legal expert Thanakrit Worathanatchakul said. Asylum seekers in the UK must be able to show that they cannot return to their countries because of fear of persecution based on race, religion, nationality or political opinions, he said. The authority would take six months to consider the request, he said.

If the asylum request is granted, they can stay in the UK for five years. If they still fear persecution in their home country after that period, they may apply for residency in the UK. They may also be granted humanitarian protection instead of asylum, which will also permit them a five-year stay in the UK. Asylum seekers could also appeal to the British courts if their requests were rejected by the UK Home Office, he said.

Thai authorities would continue their efforts to seek Yingluck’s extradition over her conviction for malfeasance.

In theory, a country is prohibited from seeking extradition of any political crime offenders, said Attorney-General Khemchai Chutiwong, but argued that Yingluck’s case is an ordinary corruption case and has nothing to do with the political conflict in the Kingdom.

The main concern now is whether the relevant agency would be able to locate the fugitive former premier, he said, noting that otherwise it would be impossible to request extradition.

The host country has full authority to decide on the request, he said. “They might regard the case as a political crime but we have solid grounds to argue that it is not,” he said.