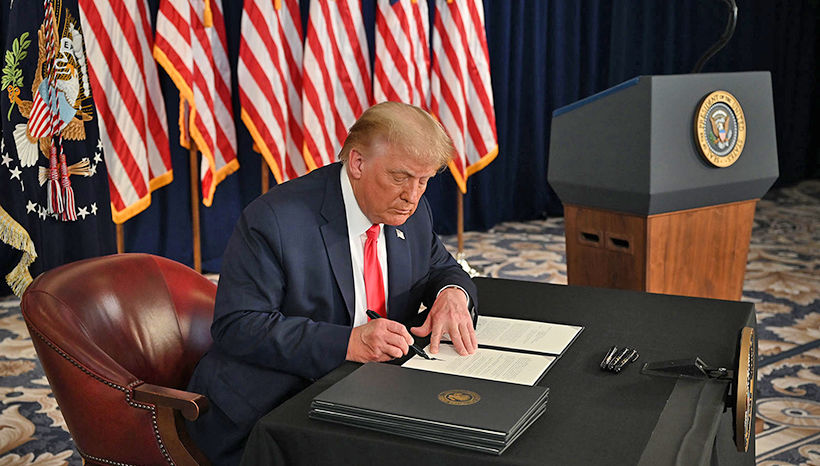 US President Donald Trump yesterday signed executive actions, 1 of which provides US$400 a week in enhanced unemployment benefits (25% of which is to be covered by the individual states) after the White House and Democrats were unable to reach an agreement on a coronavirus stimulus relief bill last week. Speaking from his his golf club in Bedminster, New Jersey, the president said that he was taking action to provide an additional or extra $400 a week and expanded benefits.

“That’s generous but we want to take care of our people.”

Trump signed 1 executive order and 3 memoranda, 1 of which will enact a payroll tax (aka. Social Security) deferment for Americans earning less than US$100,000 a year. He also proposed to extend a moratorium on evictions and defer student loan payments and forgive their interest. He did not outline where the federal funds would come from. When asked by a reporter why the unemployment benefits were earmarked at $400 instead of the previous $600, the President said that there was a difficulty with the ‘600’ number because “it really was a disincentive” for people to return to their work.

Mr. Trump also took the opportunity to criticise the Democrats, saying, “We are doing that without the Democrats. We should have been able to do it easily with them but they want all of these additional things that have nothing to do with helping people.”

Democrats are likely to challenge the executive actions in court. Trump first laid them out at a hastily called news conference on Friday at his New Jersey golf club, where he said he wasn’t “concerned about the legality” of the actions he promised.