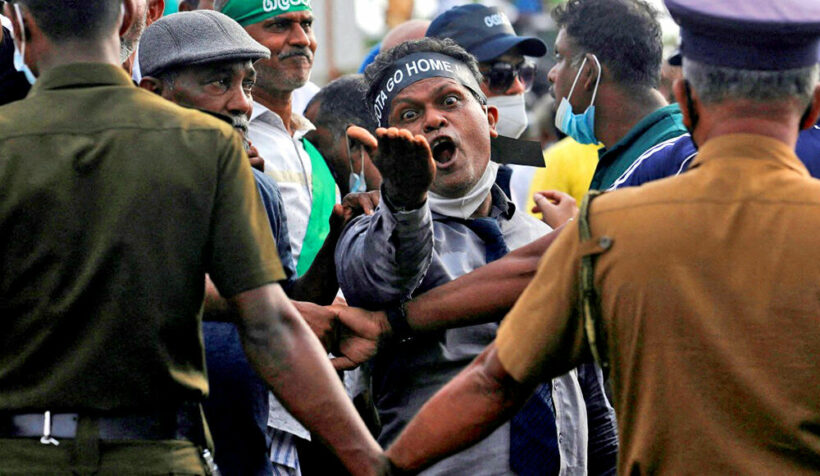 Skyrocketing inflation, political unrest and looming debt default. Another country’s economy is now failing in what’s likely to be a year or two of falling dominoes for at-risk economies.

A month of increasingly desperate headlines has culminated in two leading ratings agencies warning Sri Lanka is about to default on its national debt, a crisis that would take decades to resolve for the small nation off the south east coast of India.

S&P Global Ratings says that a default is now a “virtual certainty”. Fitch Ratings has lowered its assessment claiming “a sovereign default process has begun”.

For their part the government says that it will “temporarily default on its foreign debts as it faces its worst economic crisis in more than 70 years”.

In 2 days time, Sri Lanka is due to make US$78 million interest payments on its international sovereign bonds.

If the payment is not made within 30 days, considered a grace period, it would mark Sri Lanka’s first default on its foreign debt since independence from the UK in 1948.

The country’s new central bank governor has even appealed for donations in sterling, USD and euros last week.

Sri Lanka’s economy has been in free-fall since the start of the Covid pandemic. In 2018 the country’s dependence on tourism sat at 6.4% of Sri Lanka’s GDP. That revenue stream vanished almost totally over the past 2 years.

Sri Lanka is also facing a foreign exchange shortage, which has, incidentally, affected its capacity to import food and fuel, leading to the power cuts in the country. The shortage of essential goods forced Sri Lanka to seek assistance from friendly countries.

Sri Lanka will kick off talks with the International Monetary Fund next week on a loan program (well a bail out) to try and get its flailing economy back on track.

The country’s central bank steeply devalued its currency last month ahead of the talks with the IMF.

Rookiescot
15 hours ago, Poolie said: The BBC hate China. Thats why they say it differently to a whole bunch of international economists. They aren't known as the British Biased Company for nothing. The woman from the BBC was saying she…

Poolie
1 hour ago, Vigo said: It is indeed. The Hong Kong Trade Office is now under the direct control of the mainland PRC. Says who?

Pinetree
I've just suddenly realised; that I really couldn't give a monkeys about any of this, or SLs problems. I'm more worried about the pigeons nesting in my loft than the issues of this failed State.
Vigo
On 4/18/2022 at 4:15 PM, Poolie said: Says who? In case you missed it, the PRC absorbed all public and parapublic agencies and groups associated with the previously independent Hong Kong government.

Poolie
9 minutes ago, Vigo said: In case you missed it, the PRC absorbed all public and parapublic agencies and groups associated with the previously independent Hong Kong government. Yes, I completely missed that!

Oklahoma woman searches for Thai mother, nearly 50 years after US family adopts her