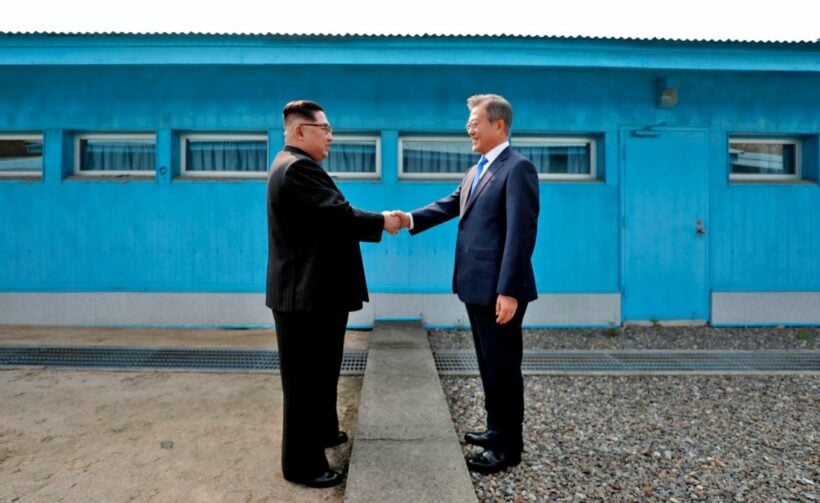 If this were to happen it would be one of the biggest injustices of selective history and memory.
Because without South Korean President Moon Jae-in’s insistence, persistence and patience, the Trump-Kim summit would never have happened. No Moon – Kim summit, no Trump – Kim summit.
A period of tension

If we think back to the tail end of 2017, the headlines that was taking place in and around the Korean Peninsula highlighted a region that was on edge.

Trump had antagonised Pyongyang with a series of tweets including comparing his rocket size to Kim, calling the chairman a ‘little rocket man’ and threatening nuclear destruction of North Korea.Pyongyang responded by calling Trump a “dotard” and questioning his mental stability.

The world watched with anxiety as it moved a little closer to a nuclear conflict, the doomsday clock inched towards midnight.

Remember how much panic there was in January in Hawaii when nuclear raid sirens went off accidentally. The world seemed to teeter on the brink.

The reason that Moon Jae-in is our person of the year is because he single-handedly disarmed the powder keg that had been primed.

Moon reached across the border when it was not popular or politically prudent to do so.

His insistence on inviting and meeting with the North Korean delegation at the Olympic Games slowed down tensions and opened room for negotiations.

His administration, at his insistence, worked tirelessly to assuage any paranoia the North had. It finally culminated in a historic meeting between the leaders of the two Koreas at the demilitarized zone.

When they did meet on the DMZ Moon did not hesitate to accept Kim’s invitation to ‘step over the line’ into North Korean territory knowing full well that there were symbolic repercussions.

The good will between the two leaders seem genuine too with Moon later returning the favour by becoming the first South Korean president to visit Pyongyang since Roh Moo-hyun a decade prior.

The Time Reader’s Poll was also a win for another South Korean. This time a mega pop sensation that dominated headlines and charts in 2018.

South Korean boy group BTS topped the poll in the Time Magazine’s 2018 Person of The Year reader poll. The poll was an online vote and had no bearing on the choice made by Time editors.

Time has named a person or group of people as its Person of the Year annually since 1927. Those who have been given the title come from various backgrounds and are picked for having the greatest influence in the events of the year in which they are picked.

While the magazine’s editors will ultimately decide the Person of the Year, Time stated that it looked to provide valuable insight into public opinion and give its readers a chance to weigh in through the reader poll.

In October, BTS was honored by the magazine as one of the “Next Generation Leaders”, along with US actress Amandla Stenberg, France soccer star Kylian Mbappé and British model Adwoa Aboah. In July, the K-pop group was included on Time‘s list of the 25 most influential people on the internet for the second straight year.

UK honours given to British divers for Thai cave rescue

Melbourne loses its crown as the World’s Most Livable City