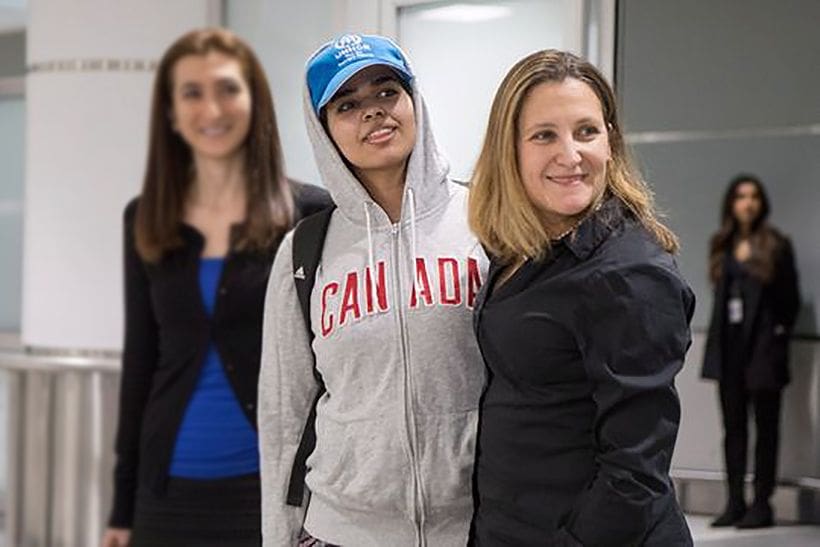 The 18 year old Saudi runaway who says she feared her family and possible death if she was deported back to Saudi Arabia, has arrived in Canada. Canadian officials offered her asylum in a case that became global news after the plucky woman mounted a Twitter storm, barricaded in her airport hotel room last weekend.

The Canadian Foreign Minister Chrystia Freeland met Rahaf Mohammed al-Qunun at Toronto’s airport after arriving on a Korean flight from Bangkok, via Seoul.

“This is Rahaf al-Qunun, a very brave new Canadian.”

Al-Qunun smiled as she exited an airport arrival door wearing a Canada zipper hoodie and a UN High Commissioner for Refugees cap.

Her arrival in Canada ended a dramatic seven days that started with her fleeing her family while visiting Kuwait and flying to Bangkok.

After a week of diplomatic ‘push and pull’ between the Thai, Saudi, then Australian and Canadian governments, the UN High Commissioner for Refugees was allowed to step in and assess the woman’s request for refugee status.

On Friday, Prime Minister Justin Trudeau announced that Canada would accept Al-Qunun as a refugee. The Canadian PM said the situation has highlighted the cause of women’s rights in Saudi Arabia.

Upon her arrival yesterday the Canadian FM said Qunun preferred not to take questions.

“It was a pleasure for me this morning to welcome her to her new home.”

“She is obviously very tired after a long journey and she preferred to go and get settled. But it was Rahaf’s choice to come out and say hello to Canadians. She wanted Canadians to see that she’s here, that she’s well and that she’s very happy to be in her new home.”

Freeland said Qunun commented about the cold weather and she responded that it gets warmer in Canada.

Qunun Tweeted two pictures from her flight. One with what appears to be a glass of wine and her passport and another holding her passport while on the plane #I did it and emojis showing plane, hearts and wine glass.

There was no immediate Saudi government reaction, nor any mention of her arrival in state media.