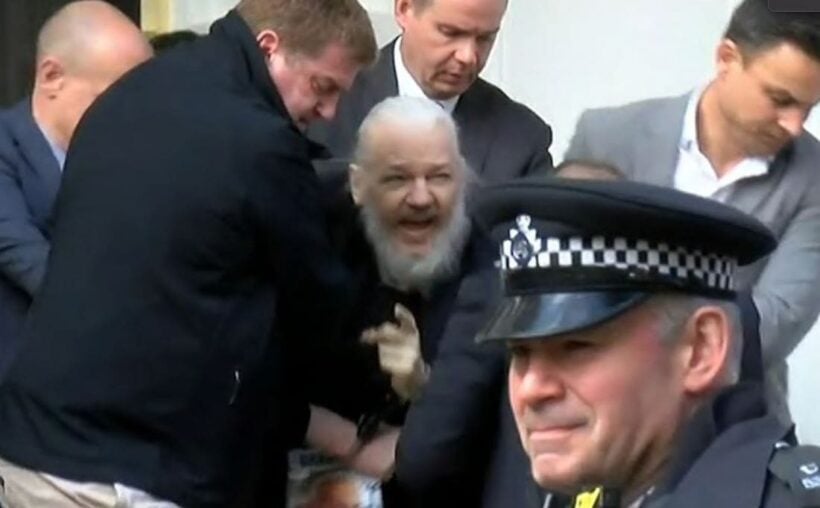 “I can confirm that Julian Assange is now in police custody and rightly facing justice in the UK.” British Home Secretary – Twitter.

The WikiLeaks founder Julian Assange’s nearly seven year stay as guest at Ecuador’s embassy in London has come to a sudden end after police entered the building and arrested him. Ecuador had withdrawn his asylum.

Assange has been domiciled at the London embassy in the Knightsbridge district since 2012 when he sought refuge there after being accused of sexual assault in Sweden. He has continually denied the allegations – they have since been dropped.

Footage shows a Assange, sporting a white beard, being carried down the embassy steps by several men to a waiting police van, clearly agitated about the unfolding situation as he was bundled into the police van against his will.

WikiLeaks accused Ecuador of breaching international law by withdrawing his asylum and claims the country’s ambassador to London had “invited” police into the embassy building to carry out the arrest.

Russia ironically accused Britain of “strangling freedom” with Assange’s arrest, in a Facebook message by a Russian foreign ministry spokeswoman.

He had refused to leave the embassy, fearing ultimate extradition to the US where WikiLeaks said he faces charges over his website publishing huge caches of hacked State Department and Pentagon files.

WikiLeaks had warned last week that a revocation of Assange’s asylum could happen within “hours to days”, citing sources in Ecuador.

WikiLeaks on Wednesday had claimed that it was being blackmailed by “dubious characters” who had obtained security camera footage of Assange inside the embassy.

The Ecuadorian Embassy noted this Tuesday that it was reassessing Assange’s asylum claim.