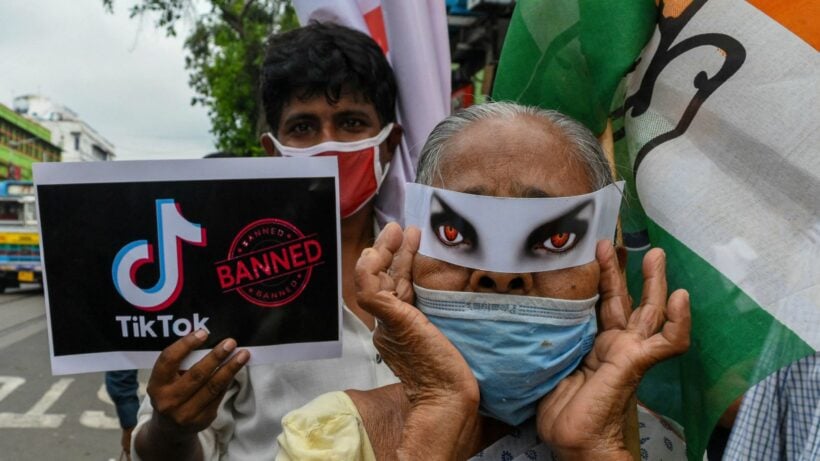 PHOT: An anti-China demonstration earlier this month in Kolkata. India has now said it will ban TikTok and dozens of other apps from Chinese companies. PHOTO: AP / Assia Nikke

India has decided to ban almost 60 Chinese apps, including the explosively popular TikTok and WeChat, which has left millions of users reportedly startled and disappointed. The Indian government says the apps were “prejudicing the sovereignty and integrity of India, the defence of India, and the security of state and public order.”

Although TikTok has refused to share any data with the Chinese government, Beijing says it was “strongly concerned.” Experts describe the ban as a political move in the context of rising bilateral tensions after a border dispute between China and India earlier this month. Sources say the conflict resulted in troops fighting in the Himalayan region of Ladakh. Between the two nuclear-armed neighbors, it has been reported that 20 Indian troops were left dead. China has not given any details as to whether there were any Chinese casualties but both countries have since increased their deployment of troops close to the disputed border.

Calls for a boycott of Chinese goods soon emerged and the government issued directives to cancel or limit Chinese contracts with public sector companies. But the ban on apps has taken many Indians by surprise. The list includes the Weibo microblogging platform, the Clash of Kings strategy game, Alibaba’s UC Browser, the Club Factory and Shein e-commerce apps.

App makers say they are in talks with the Indian government, while Beijing is asking India to reconsider its decision.

“We want to stress that Chinese government always asks Chinese businesses to abide by international and local laws and regulations. India’s government has a responsibility to uphold the legal rights of international investors including Chinese ones,” ANI news agency quotes Chinese foreign ministry spokesperson Zhao Lijian as saying.