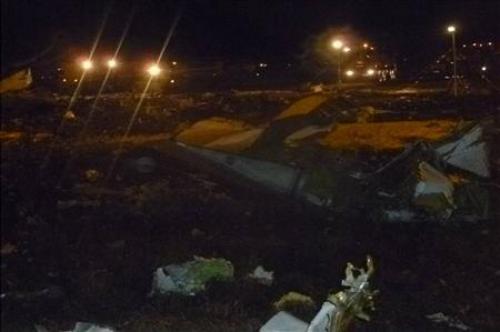 The son of the president of the oil-rich province of Tatarstan and the regional head of the FSB intelligence service were named among those killed when the plane exploded in a ball of fire on hitting the runway.

Pictures showed charred wreckage scattered over a wide area, apparently taken after firefighters had extinguished the fire. Russian television broadcast a blurred video showing a bright flash of light. It also published a photo of the plane’s gaping fuselage with firefighters in the foreground.

The Tatarstan airlines flight from Moscow had been trying to abort its landing in order to make a second approach when it crashed, killing all 44 passengers and six crew on board, emergency officials said.

Flight U363 took off from Moscow’s Domodedovo airport at 6:25 pm (1425 GMT) and crashed just over an hour later, emergency officials said. The leased plane was 23 years old.

According to local reports, the Boeing lost altitude quickly and its fuel tank exploded on impact.

There were high winds and above-zero temperatures over the airport in central Russia. Flights to and from the airport were halted until midday on Monday.

Kazan, which is 800 km (500 miles) east of Moscow, is the capital of the largely-Muslim, oil-rich region of Tatarstan. A new runway was built at the airport ahead of the World Student Games, held in the city earlier this year.

Russia will host the Winter Olympics in the southern city of Sochi early next year.

The son of Tatarstan President Rustam Minnikhanov, Irek, was among those killed in the crash, as was the head of the regional Federal Security Service (FSB) Alexander Antonov, according to a passenger list whose authenticity was confirmed by the regional government.

Russia and the former Soviet republics combined have one of the world’s worst air-traffic safety records, with a total accident rate almost three times the world average in 2011, according to the International Air Transport Association.

Prime Minister Dmitry Medvedev called the disaster “a frightening tragedy”, offering his condolences to the relatives of the victims in a Tweet on Sunday.

State television showed images of a woman scanning a list of passenger names posted outside the airport and crumbling into tears as she apparently recognised one.

Boeing officials had no immediate comment on the circumstances of the crash, but issued a statement.

“Boeing’s thoughts are with those affected by the crash of the Tartarstan air company flight. Boeing is prepared to provide technical assistance to the investigating authority as it investigates the accident.”

In Soviet times, flag carrier Aeroflot had a virtual monopoly of the airline industry, but after the collapse of the Soviet Union, a multitude of small private companies emerged.

A spokesman for state aviation oversight agency Rosaviatsia said authorities would search for the flight recorders.

“The plane touched the ground and burst into flame,” Sergei Izvolsky said. “The cause of the crash as of now is unknown.”

The plane had been forced to make an emergency landing a year earlier on November 26 due to problems with “cabin depressurisation” shortly after take off, a law enforcement source told Interfax news agency. No one was hurt.

IATA said last year that global airline safety had improved but that accident rates had risen in Russia and the ex-Soviet Commonwealth of Independent States.

In April 2012, at least 31 people were killed when a Russian passenger plane crashed after take-off in Siberia.

In September 2011, a Yak-42 passenger jet carrying members of a major league ice hockey team came down shortly after takeoff and burst into flames near the Russian city of Yaroslavl, killing 44 people.

The Boeing 737 is the world’s most popular passenger jet in commercial use today. There have been 170 crashes involving this model of aircraft since it came into use.

In the Russian city of Perm in 2008, a Boeing 737 exploded a kilometre above the ground, killing 88 people.


Bachelet has big lead in Chile election but will face runoff
Reuters / Phuket Gazette
PHUKET: Leftist candidate Michelle Bachelet was the clear winner in Chile’s presidential election on Sunday, although she will have to wait until a second round runoff next month to seal her victory.

With nine candidates running, the vote was fractured and Bachelet, seeking her second term as president, fell short of the 50 percent she needed for an outright first-round victory.

Bachelet, who led Chile between 2006 and 2010 as its first female president, had just over 46 percent support with 83 percent of votes counted on Sunday night. Evelyn Matthei of the ruling right-wing coalition was second with around 25 percent.

The two women will go head to head in a runoff on December 15. Bachelet is expected to win by a wide margin, and she is promising an ambitious program of tax and education reform to tackle inequality in the top copper exporting country.

Backers of the largely anti-establishment minor candidates likely will throw their support to Bachelet in the second round, or else abstain, so her eventual victory looks assured.

The result will be disappointing for Bachelet, who had campaigned hard to get the strong mandate that an outright win would have implied, but she put a brave face on it as she spoke to supporters at her temporary headquarters in central Santiago on Sunday night.

“The country has mostly voted for the proposal that we have made for Chile, so that Chile will be once and for all the modern and fair country that we want,” she said to cheers.

“We won tonight and we will work to win by an ample margin in December.”

A physician by training and moderate socialist by conviction, Bachelet has promised 50 reforms in her first 100 days if she returns to power.

Her flagship policy is an increase in corporate taxes to 25 percent from 20 percent to pay for education reforms that include a gradual move to free higher education.

“I voted for Bachelet,” said pensioner Fernando Forttes as he left the polling station on Sunday. “I hope the model will change … with more social justice and through that more opportunities. Her program is a European social democrat program. It’s nothing from another world. Here there will be no revolution.”

Bachelet also needs control of Congress to push through the changes she wants.

Final results from congressional elections were expected later on Sunday, although early indications were that Bachelet’s bloc would have at least the simple majority it needs to carry out tax reform.

However, under the Chilean system, the governing coalition needs more than a simple majority to pass some kinds of legislation, making it easier for the opposition to blo