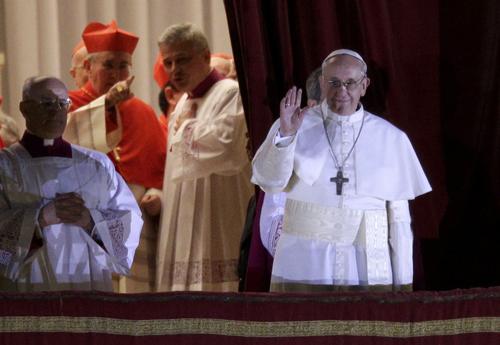 
Argentina’s Bergoglio elected as new Pope Francis
Reuters / Phuket Gazette
PHUKET: Jorge Mario Bergoglio of Argentina was elected in a surprise choice to be the new leader of the troubled Roman Catholic Church yesterday, taking the name Francis I and becoming the first non-European pontiff in nearly 1,300 years.

Pope Francis, 76, appeared on the central balcony of St. Peter’s Basilica just over an hour after white smoke poured from a chimney on the roof of the Sistine Chapel to signal 115 cardinal electors had chosen him to lead the world’s 1.2 billion Roman Catholics.

“Pray for me,” the new pontiff, dressed in the white robes of a pope for the first time, urged a crowd of tens of thousands of people waiting in the square below.

The choice of Bergoglio, who is the first Latin American and first Jesuit pope, was announced by French cardinal Jean-Louis Tauran with the Latin words “Habemus Papam” (“We have a pope.”)

Francis has became the 266th pontiff in the Church’s 2,000-year history at a time of great crisis, with the church under fire over a child sex abuse scandal and torn by infighting in the Vatican bureaucracy.

Although a conservative theologically, Francis is known for his concern for the poor and is expected to bring a radical change of style to the Church leadership, indicated by his choice for the first time of the name of St Francis of Assisi, who died in 1226 after living a life of poverty and simplicity.

He immediately showed the difference from his predecessor Benedict, an aloof theologian, with a gesture of humility, asking the waiting crowd to bless him before he blessed them.

Bergoglio shunned the papal limousine after his appearance on the balcony and chose to take a shuttle bus with other cardinals back to the Vatican residence where they are staying, for an evening meal.

Bergoglio is known as a humble man who leads an austere and sober life without ostentation, travelling by public transport and living in a small apartment outside Buenos Aires.

He is willing to challenge powerful interests and is deeply concerned about the social inequalities in Argentina and elsewhere in Latin America. He has had a sometimes difficult relationship with President Cristina Fernandez and her late husband and predecessor Nestor Kirchner.

Francis has spoken out strongly against gay marriage, denouncing it in 2010 as “an attempt to destroy God’s plan”.