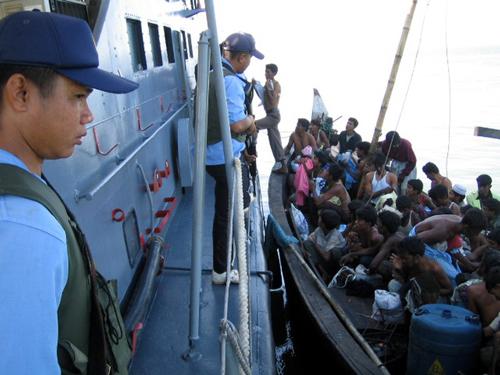 
Navy dismisses reports on Rohingya killings
Phuket Gazette / The Nation
PHUKET: Royal Thai Navy Commander-in-Chief Admiral Surasak Rounroengrom dismissed the report as impossible and untrue and asserted that the Thai navy had not killed any Rohingya people as it did no more than offer them humanitarian aid.

“I state that no [Thai] Navy officer could be that ruthless,” he said.

Admiral Surasak said he had given orders to the Thai Navy Region 3 and Phang Nga naval base that Rohingya boats found attempting to reach Thai shores should be provided with food, water, medicines and gasoline before being towed back to sea to reach their intended final destination, as Thailand could only be a transit location. He said Thailand’s policy was not to shelter or care for Rohingya refugees, but to send them back to the sea in accordance with humanitarian principles.
“I assure you that navy officers have no reason to kill Rohingya, because they are not an enemy.

“Since the policy is to push them back out to sea, we provide humanitarian aid with food and water, medicine and gas for them to continue their journey. All we do is help them, even fixing their boats [if necessary], before sending them back on their way,” Surasak said.

He was speaking in response to Human Rights Watch’s claim that sailors from Thailand’s Navy shot at ethnic Rohingya “boat people”, causing at least two deaths.

The Thai government should immediately investigate the incident, and direct the Navy to abide by international standards on the use of force, the rights group said.

On February 22, Thai sailors near a pier in Phang Nga province fired on a group of about 20 Rohingya asylum-seekers who had been in Navy custody since the previous day, when their boat with about 130 on board had run out of fuel on its journey from Burma to Malaysia, the rights group said.

“Rohingya fleeing Burma should be given protection, not shot at,” said Brad Adams, Human Rights Watch’s Asia director. “The Thai government should urgently investigate why sailors opened fire at boat people helpless in the sea and prosecute all those found responsible.”

The survivors said that on the morning of February 20, Thai fishermen had helped their drifting boat ashore on Surin Island off the coast of Phang Nga province. On that same day, at around 6.30pm, a Thai Navy patrol boat numbered TOR214 arrived on the island and towed their boat back to the sea.

Navy patrol boat TOR214 and the Rohingya boat arrived near a pier in Kuraburi district of Phang Nga province at around 5am the next morning.

According to the survivors and Thai villagers on the shore, Navy personnel from the patrol boat began to divide the Rohingya into small groups in the boat and ordered them to get ready to board smaller boats.

At that point, the Rohingya were uncertain whether they would be taken to immigration detention on the mainland or be pushed back to the sea.

When the first group of 20 Rohingya was put on a smaller boat by the Thai navy, some panicked and jumped overboard.

“Navy personnel fired into the air three times and told us not to move,” one survivor told Human Rights Watch. “But we were panicking and jumped off the boat, and then they opened fire at us in the water.”

Four Rohingya who swam ashore were rescued by local Thai villagers. Thai security forces searched the area for two days after the incident, but the villagers kept the survivors hidden, the survivors said, according to the rights group.

The bodies of two Rohingya showing bullet wounds were later pulled from the sea and buried in a Muslim cemetery in Kuraburi district. Thai fishermen told Human Rights Watch they saw more dead bodies in the water but had no more information. The fate of the remaining passengers on the boat remains unknown after it was towed away by the Thai Navy.

Human Rights Watch called on the Thai government and the National Human Rights Commission to conduct thorough and transparent investigations into the shooting.

If unnecessary or excessive force is found to have been used, all those responsible, including officers who gave orders to fire, should be prosecuted, Human Rights Watch said.

Thai security forces, when performing law enforcement duties, should abide by the United Nations Basic Principles on the Use of Force and Firearms by Law Enforcement Officials, Human Rights Watch said.

Each year tens of thousands of ethnic Rohingya in Burma’s Arakan state set sail to flee the dire poverty and persecution they suffer at the hands of the Burmese government, the report said.

The situation significantly worsened in 2012 following communal violence in Arakan state in June and October targeting Rohingya and other Muslim groups.

“The Thai government should scrap its “push back” and “help on” policies that deny Rohingya boat people their right to seek asylum,” Adams said.

Under the Universal Declaration of Human Rights, everyone has the right to seek asylum from persecution. While Thailand is not a party to the 1951 Refugee Convention, under customary international law the Thai government has an obligation of “nonrefoulement” – not to return anyone to places where their life or freedom would be at risk.