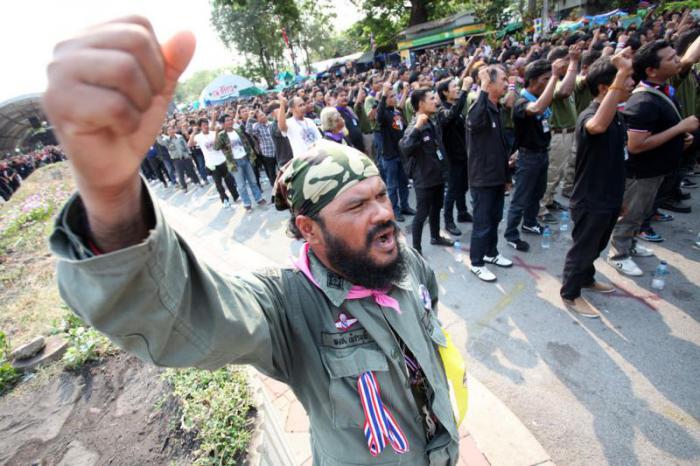 Ruling on poll could ease crisis
The Nation / Phuket Gazette

PHUKET: A political breakthrough could happen this week with the Constitutional Court may rule on whether the February 2 poll was unlawful, and the possibility of a verdict annulling the election.

A petition requesting the Constitutional Court to rule on the validity of the poll was forwarded by the Ombudsman on behalf of Thammasat University’s law lecturer, Kittipong Kamolthamwong, who claimed the election process was flawed because it was unfair.

The court is scheduled on Wednesday to hear the case, with the Election Commissioners, Prime Minister Yingluck Shinawatra and the chief of Office of the Ombudsman, or their respective representatives, set to appear.

The Democrat Party expects the court to annul the election.

“If the verdict goes as we expect, it could be a starting point for both sides to hold negotiations to end the crisis,” a key Democrat member said.

He said if the poll was nullified, the caretaker government and the EC would need to set a new election date and urge the Democrats to participate.

“But the only condition we have is the government has to resign as caretaker,” he said.

“So the best way out is for Yingluck to resign to pave the way for a non-elected or neutral person to head the government and take care of the election.”

After the election, the Democrat said the new government would initiate national reforms before dissolving the House and hold another election.

He said this solution would be acceptable to Pheu Thai if they thought they would win the election again.

However, he said his prediction hinged on the court verdict and the talks between the two sides.

A source from Pheu Thai echoed the same forecast.

He said he had heard that the court was likely to nullify the election on Wednesday and pave the way for a non-elected government.

However, a source from the charter court said the court had yet to decide if the ruling would be made on the same day as the hearing. However, if the judges thought they had all the facts, they might make a ruling on the same day.

In a previous case relating to the February 2 election that followed the filing of a petition by the EC, the charter court issued its ruling after three days.

The court had previously accepted another petition related to the general election filed by the EC.

One of the queries raised by the EC was whether a new Royal Decree would need to be issued for only the 28 constituencies that did not have candidates or for all constituencies.

If the court rules that a Royal Decree is needed for all the constituencies, then a new general election will be needed.

The court may include the EC petition in the Ombudsman’s case.

Meanwhile, six independent agencies under the Constitution will present a road map and attempt to mediate between both sides of the political divide today.

Red shirt co-leader Weng Tojirakarn voiced concerns over the move by the six organisations, saying it could worsen the political crisis or it could be a move to use judicial activism to topple the government.

Pheu Thai spokesman Prompong Nopparit said he had doubts that the move would lead to a non-elected prime minister.

PHUKET: The outspoken Naval Special Warfare Command chief and a senior Army officer whose promotion was suspended because he was tied to a violent clash with the red-shirts four years ago may be highlights of the mid-year military reshuffle. The reshuffle, which will take effect next month, is expected to be announced today.

The first involves the transfer of Rear Admiral Winai Klom-in, chief of the Naval Special Warfare Command, or Navy Seals.

Sources and earlier reports had stated that Winai will definitely be removed. Anti-government protest groups have petitioned Navy Commander in Chief Admiral Narong Pipatanasai to block the move, but Winai looks set to be kicked upstairs.

However, it is expected that the controversy surrounding Winai’s transfer will die down promptly because he will be promoted to be a vice admiral, although he will also be given an inactive post as a special adviser to the Royal Thai Navy.

Permanent secretary for Defence General Nipat Thonglek said that Winai had overstepped the mark |for military officers by giving interviews in regard to the political |conflict, so he needed to be transferred. Either way, the length of time Winai has been in his post – three years and six months – justifies the transfer.

The current chief of the Fourth Army Area, Lt Gen Sakol Chuenptrakul, will retire at the end of September, so he will be moved to a position where he becomes a full general before his retirement.

Walit is a younger friend of Army Commander in Chief Gen Prayuth Chan-ocha from the Eastern Tigers faction.

Walit reportedly missed two previous chances to become the commander of the First Army Area because of strong opposition from the red shirts.

The reds opposed Walit being promoted because he commanded the Second Infantry Division, which was involved in a bitter deadly clash with red-shirt protesters at Khok Wua Intersection on April 10, |2010.

During the operation, he was injured in a grenade attack and his close aide, Colonel Romklao Thuwatham, was killed.

According to sources, Prayuth now has the chance to promote his friend to the post of Fourth Army Area commander in the south.

The upcoming mid-year reshuffle will see commanders of the four armed forces transfer close aides and favoured officers to key positions to use them to support of their chosen successors in the annual reshuffle at the end of September.

This year will see all the four commanders-in-chief retire at the same time.

But sources said the Army will remain a thorn in the side of the Pheu Thai-led government after the mid-year reshuffle because Prayuth will put his men, or those close to Privy Council President General Prem Tinsulanonda, in key combat command positions.

PHUKET: Another M79 grenade was fired on Saturday night at the house of the wife of Suthep Thaugsuban, secretary general of the People’s Democratic Reform Committee (PDRC).

Srisakul Promphan posted a message on Facebook to say it was the second bomb attack on her Phutthamonthon home. She said the grenade on Saturday landed on the lawn near the dining room.

“I was at home when the grenade landed,” she said.

“I don’t know how many more grenades will be fired to satisfy them.

“But we will fight on. Although they want to ta