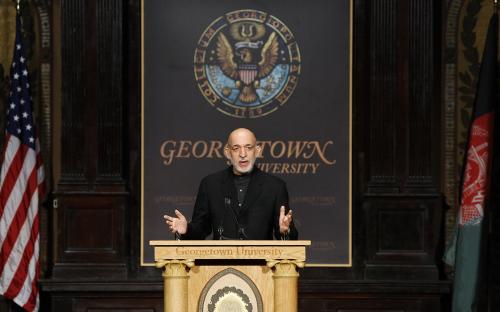 PHUKET: (Reuters): President Barack Obama and Afghan President Hamid Karzai agreed yesterday (January 11) to speed up the handover of combat operations in Afghanistan to Afghan forces, raising the prospect of an accelerated U.S. withdrawal from the country and underscoring Obama’s determination to wind down a long, unpopular war.

Signaling a narrowing of differences, Karzai appeared to give ground in talks at the White House on U.S. demands for immunity from prosecution for any American troops who stay in Afghanistan beyond 2014, a concession that could allow Obama to keep at least a small residual force there.

Both leaders also threw their support behind tentative Afghan reconciliation efforts with Taliban insurgents, endorsing the establishment of a Taliban political office in Qatar in hopes of bringing insurgents to inter-Afghan talks.

Outwardly, at least, the meeting appeared to be something of a success for both men, who need to show their vastly different publics they are making progress in their goals for Afghanistan. There were no signs of the friction that has frequently marked Obama’s relations with Karzai.

Karzai’s visit came amid stepped-up deliberations in Washington over the size and scope of the U.S. military role in Afghanistan once the NATO-led combat mission concludes at the end of 2014.

“By the end of next year, 2014, the transition will be complete,” Obama said at a news conference with Karzai standing at his side.

“Afghans will have full responsibility for their security, and this war will come to a responsible end.”

The Obama administration has been considering a residual force of between 3,000 and 9,000 troops – far fewer than some U.S. commanders propose – to conduct counterterrorism operations and to train and assist Afghan forces.

A top Obama aide said this week that the administration does not rule out a complete withdrawal after 2014, a move that some experts say would be disastrous for the weak Afghan central government and its fledgling security apparatus.

Obama yesterday left open the possibility of that so-called “zero option” when he several times used the word “if” to suggest that a post-2014 U.S. presence was far from guaranteed.

Insisting that Afghan forces were “stepping up” faster than expected, Obama said Afghan troops would take over the lead in combat missions across the country this spring, rather than waiting until the summer as originally planned. NATO troops will then assume a “support role,” he said.

“It will be a historic moment and another step toward full Afghan sovereignty,” Obama said.

Obama said final decisions on this year’s troop cuts and the post-2014 U.S. military role were still months away, but his comments suggested he favours a stepped-up withdrawal timetable.

There are some 66,000 U.S. troops currently in Afghanistan. Washington’s NATO allies have been steadily reducing their troop numbers as well despite doubts about the ability of Afghan forces to shoulder full responsibility for security.