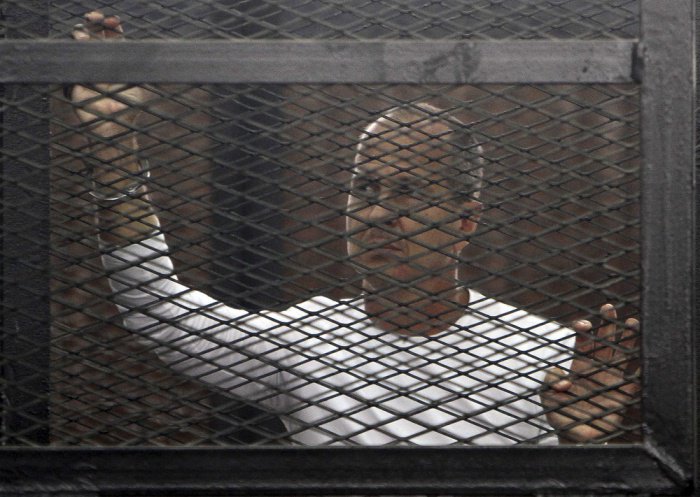 PHUKET: Al Jazeera journalist Peter Greste was released from a Cairo jail on Sunday and left Egypt after 400 days in prison on charges that included aiding a terrorist group, security officials said.

There was no official word on the fate of his two Al Jazeera colleagues – Canadian-Egyptian Mohamed Fahmy and Egyptian national Baher Mohamed – who were also jailed in the case that provoked an international outcry.

The three were sentenced to seven to 10 years on charges including spreading lies to help a terrorist organisation – a reference to the outlawed Muslim Brotherhood. One month ago, however, a court ordered their retrial.

A security official said Fahmy was expected to be released from Cairo’s Tora prison within days. His fiancée said she hoped he would be free soon and deported to Canada. “His deportation is in its final stages. We are hopeful,” Marwa Omara told Reuters.

Canada’s foreign ministry welcomed what it called positive developments. “We remain very hopeful that Mr. Fahmy’s case will be resolved shortly,” it said in a statement.

Many Egyptians see Qatar-based Al Jazeera as a force set on destabilising the country, a view that has been encouraged in the local media which labelled the journalists “The Marriott Cell”, because they worked from a hotel of the U.S.-based chain.

Egyptian authorities accuse Al Jazeera of being a mouthpiece of the Muslim Brotherhood, the Qatar-backed movement which President Abdel Fattah al-Sisi toppled in 2013 when he was Egypt’s army chief.

The timing of Greste’s release came as a surprise, just days after Egypt suffered one of the bloodiest militant attacks in years. More than 30 members of the security forces were killed on Thursday night in Sinai, and ensuing comments from Sisi suggested he was in no mood for compromise.

The Interior Ministry said on its Facebook page that Sisi released Greste under a decree issued in November authorising the president to approve the deportation of foreign prisoners.

Australia’s foreign Minister Julie Bishop said Greste flew to Cyprus from Cairo. “He was immensely relieved and he was desperate to come home to Australia and reunite with his family,” Bishop said.

She said several governments had raised Greste’s case with Egyptian authorities. “Prime Minister (Tony) Abbott spoke to President al-Sisi and we had many other governments, including in the region, make representations on Mr Greste’s behalf.”

The journalists say they were doing their jobs when detained. Their imprisonment reinforced the view of human rights groups that the government was rolling back freedoms gained after the 2011 uprising that toppled autocrat Hosni Mubarak.

Since the army’s overthrow of president Mohamed Mursi of the Brotherhood after mass protests against him, security forces killed hundreds of Islamists, imprisoned thousands of others and then rounded up liberal activists charged with protesting without police permission.

Al Jazeera said its campaign to free its journalists from Egypt would not end until all three were released.

The case has contributed to tensions between Egypt and Qatar, though speculation had been rising that Saudi mediation had improved ties, raising the possibility that Sisi would deport or pardon the journalists.

They were detained in December 2013 and charged with helping “a terrorist group” by broadcasting lies that harmed national security.

Baher Mohamed was given an extra three years for possessing a single bullet. If the authorities decide to free him, resolving his case could be more complex because he does not possess a foreign passport.

“This is what we expected would happen,” his brother Assem said. “Those who rule the country, this is not the first time they’ve done this, there have been foreigners who they have let leave the country when they were in trouble and their Egyptian colleagues are the ones who paid the price.”

Malaysia declares MH370 an “accident”, airline to proceed with compensation