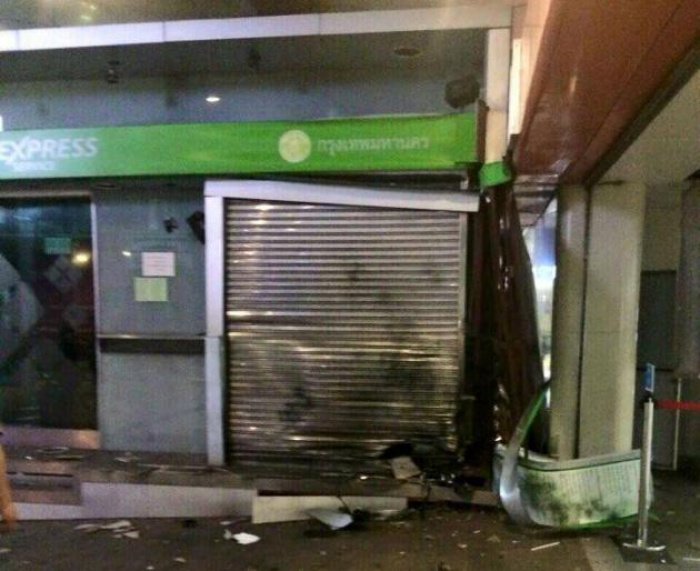 The BTS suspended services at the Siam Station at 8.10pm after the two bombs exploded under the sky path linking the mall and the Siam BTS station. The service resumed at 8.38pm.

Police said the bombs were planted behind a power transformer. Bomb disposal officers and crime detection officers from both the Pathumwan police station and the Metropolitan Police Division 6 rushed to the scene after the explosions took place and sealed off the area to gather evidence.

Police said the bombs were made of steel pipes.

The bombs caused little damage but were the first to shake the Thai capital since the military seized power in May to end months of sometimes deadly street protests.

“There were improvised explosive devices detonated by a digital clock,” said Lt Gen Prawut Thawonrsiri, a spokesman for the Royal Thai Police.

The motive behind the attack appeared to be to create panic rather than take lives, Gen Prawut said. The police have yet to identify the bombers, he added

Political tension in Thailand has been high since a national assembly hand-picked by the junta last month banned former Prime Minister Yingluck Shinawatra from politics for five years.

The same day, the country’s Attorney General said she would face charges and a possible jail sentence for negligence.

The decisions angered supporters of Ms Yingluck and her exiled brother Thaksin, although there has been little sign of a return to the street protests that have dogged Thailand for the past 10 years.

The junta last week summoned senior politicians critical of the government’s handling of Ms Yingluck’s cases for a dressing down.

Ten years of turbulent politics in Thailand have pitted Ms Yingluck and Mr Thaksin, himself a former prime minister, and their rural support base against the establishment that sees the Shinawatras as a threat and reviles their populist policies.

This was the first bomb in the Thai capital since before the coup, Army Lt Gen Kampanart Ruddit told reporters.

Sporadic violence during the six months of street protests that preceded the May 22 coup claimed almost 30 lives, with scores more injured.

The explosions on Sunday showed that martial law could not yet be lifted, said Gen Kampanart, who is responsible for the Bangkok area.

NLA panel to summon US envoy