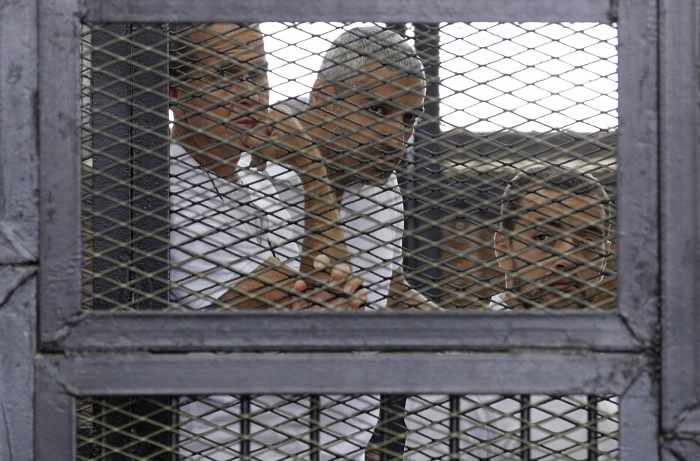 Egypt defends itself at U.N. amid outcry over jailing of journalists
Reuters / Phuket Gazette

PHUKET: Egypt defended its judicial system at the United Nations on Wednesday amid a global outcry over the jailing of Al Jazeera journalists, telling diplomats and reporters that it respects the role of the media and does not consider journalism a crime.

Diplomats from more than 17 countries, including eight members of the U.N. Security Council, attended the meeting organised by the U.N. Correspondents Association to show solidarity with the three imprisoned Al Jazeera journalists.

The cases sparked global outrage. The United States called for the “chilling, draconian sentences” to be reversed.

“The Egyptian judicial system is very well-known for providing full guarantees for the defendant,” Egypt’s deputy U.N. Ambassador, Osama Abdelkhalek Mahmoud, told the meeting. “I have confidence that the due procedures will be followed and justice will be done in such cases and in all other cases.”

A social media campaign pushing for the release of the journalists uses the catchphrase “Journalism is not a crime.”

“We fully subscribe to this wording you have used – journalism is not a crime,” he said. “We have 1,200 foreign correspondents in Egypt working, none of them were harassed or annoyed … We highly respect the role played by journalists.”

Deputy Director of the Committee to Protect Journalists, Robert Mahoney, said some 67 journalists had been detained in the Egypt since the government of former Egyptian President Mohamed Mursi was toppled in July.

“A lot have been let out, but today as we speak there are 14 journalists in jail in Egypt, including the three Al Jazeera journalists,” he said. “That makes Egypt … the biggest jailer of journalists in the Arab world, more than Syria.”

Former East Timor President Jose Ramos-Horta told the meeting at the United Nations that he believed the situation could be resolved through creative diplomacy.

“Sometimes leaders like President Sisi of Egypt need some way out. They have given a message, their message is heard, now it’s time to find a solution satisfactory to everybody,” he said.