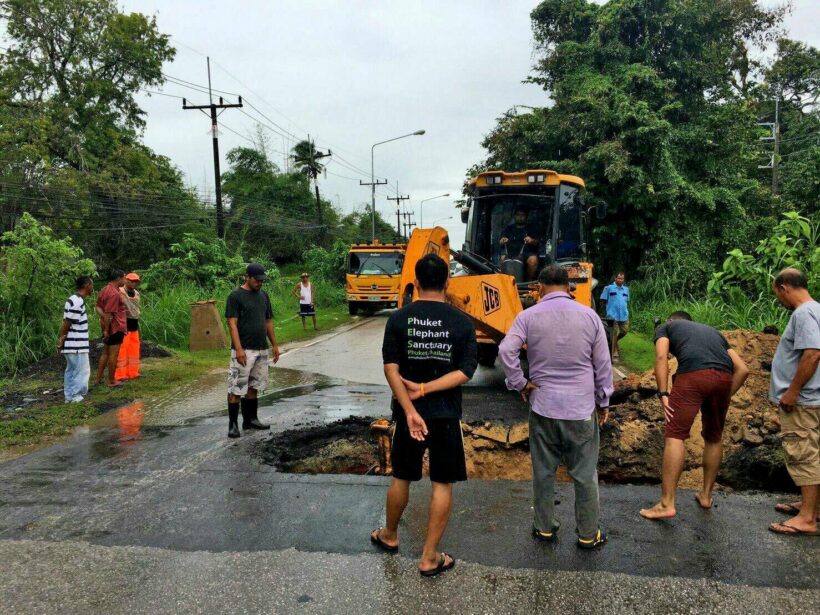 Today (September 16) a team from Phuket Provincial Highway Office has closed and is fixing Bangpae Bridge, which is on Tharua road, on the way towards Baan Para in Thalang, after the bridge collapsed due to the flood. The bridge is expected to be finished by 8pm.

Another team led by Vice Governor, Siriporn Chuasawad, also visited and helped the locals who are affected from the disaster.

“There are 2,000 households affected by this flood and 4 spots in Thalang have been declared as disaster zones which include Thepkasattri, Paklok, OrBorTor Thepkasattri and Srisunthorn,” said the Governor, Norapat Plodthong.

“I have ordered the vice governor to visit the affected places and give away basic utilities and consumption goods for people.”

The Governor has also ordered all departments involved to help people who are affected from the flood yesterday while he prepares for meetings to discuss about short and long term plans to handle the flood. 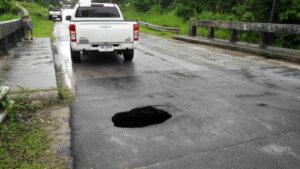 “While in Phuket Town area of Rassada, a retaining wall of privately owned land has collapsed and destroyed some townhouses of the neighbours. 22 houses are affected from this incident and 5-6 of them are severely damaged. Those who have their houses in the risky area also have been evacuated to a safer place. A team of public works engineers are on location to check for the cause.”

Phuket Provincial Offices of Public Works and Town & Country Planning has filed for budgets to spend on flood solution systems for the whole island. In the Phuket Town area, Bang Yai Canal will be expanded and developed to hold more water. And for Phuket Town as well as Patong, the number of drains will be increased to allow water to drain to the sea faster.

The flooding around the island has been drained though some people have still set up sand bags in front of their houses to prepare for any flash flooding as the rain appears that it will continue for a few days, partly due to the weather systems surrounding the Doksuri storm that hit Vietnam yesterday and continues to head west into Thailand as it weakens.

UPDATE – What the new tax increases mean for you