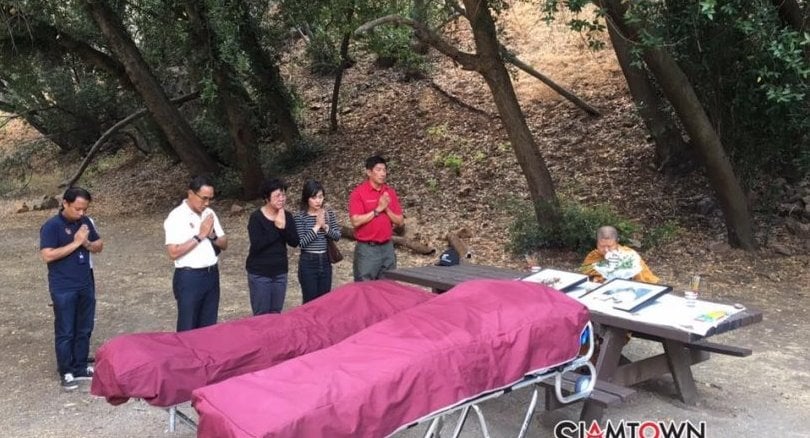 US rescuers has retrieved remains of two Thai postgraduate students at the South Florida University from their car that plunged into a river in the US more than a month ago.The retrieval operation sent rescuers go down from a helicopter to the Kings River where the car is stuck and pulled the car to a river bank.

Remains of Thiwadee Saengsuriyarit, 24, and Bhakapon Chairattanasongporn, 28, will be sent for autopsy and identity confirmation. Families of both victims were present at the site. A monk was brought to the scene to perform religious rite for the victims.

The family of Thiwadee intends to bring the ashes back to Thailand while Bhakapon’s family plans to scatter the ashes in California.

Efforts to retrieve their bodies from the car that got stuck in the river since July 26 have been delayed because of the high water level and strong currents in the river as well as the bad weather, which could have threatened the safety of the rescue teams.

The Fresno County Sheriff’s Office decided to retrieve the remains on Friday morning local time as the flow of the river and water level have reached levels that will not make it unsafe for the rescuers.

The Thai Consulate Office in Los Angeles said on its Facebook page that it was informed of the decision by the Fresno County Sheriff’s Office.

The delay in retrieving the remains had led to some criticism of US agencies who were viewed as not wanting to recover the bodies because the victims were Asian, not Americans.