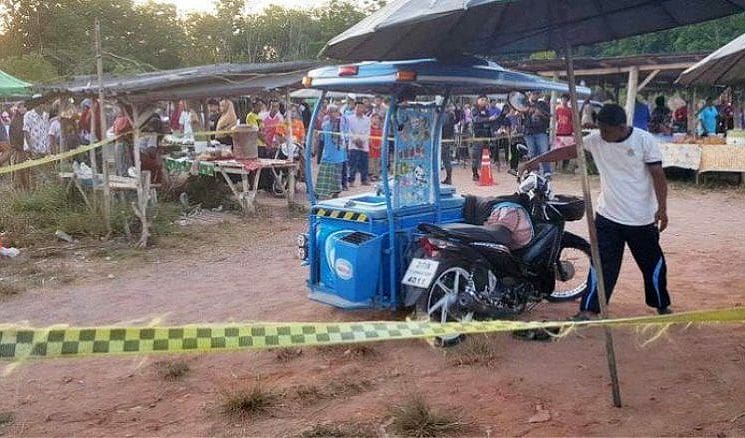 One person has been killed and two others injured during two separate shootings in Pattani province on Thursday night.

In Sai Buri district, a 24 year old Narathiwat-based paramilitary ranger volunteer Pathompong Kaewthong and his 22 year old wife Nureehan Dengla, were shot and wounded in Tambon Kadunong while riding home on their motorcycle after shopping at a local market.

Two men on another motorcycle overtook them on Sai Buri-Kapor Road and the passenger shot Pathompong in the head. A stray bullet also hit Nureehan’s right leg. The husband and wide survived the attack.

Police found that Pathompong was on leave and visiting his wife’s hometown – they suspect that the assailants had been monitoring him for a while because he worked for the state military and launched a gun attack on him as part of the ongoing insurgency in the South.

Meanwhile, in Yarang district, a 45 year old ice-cream vendor Rosadee Nidae was shot dead at 6pm after parking his tricycle at the Jeh Bo Ngor Market in Tambon Khao Toom. A stray bullet also hit the knee of a 54 year old bystander.

Police found that the shooter had brazenly walked among the shoppers, then pulled out a gun and shot Rosadee twice before fleeing with an accomplice, who had kept his motorcycle running so they could make a speedy getaway.

Police are trying to establish if the second attack stemmed from the ongoing unrest or from a personal conflict.