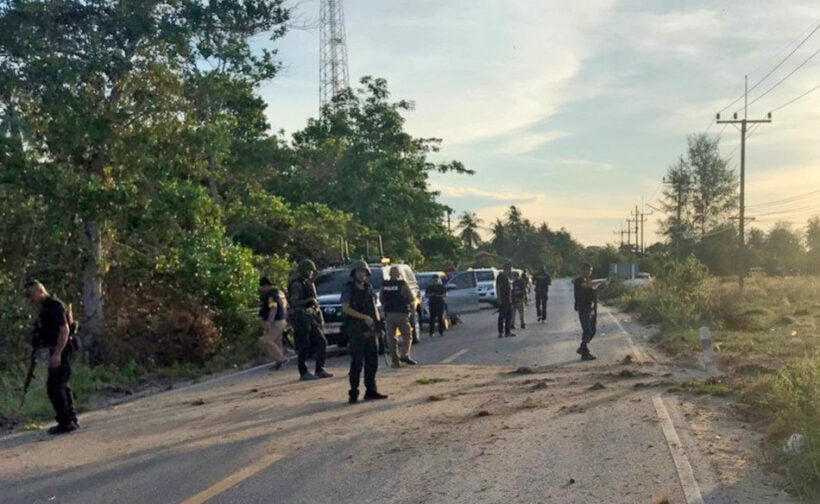 4 civilians were among 10 people injured in a bombing in Pattani province, a day after a soldier died in a similar blast. The bombings are the first to strike Thailand’s restive deep South on consecutive days since Malaysia’s Barisan Revolusi Nasional rebels declared a unilateral ceasefire in early April, although deadly shootings linked to the insurgents have occurred since then. The region is home to a decades-old separatist insurgency which has become a more bloody conflict than the situation on the Gaza Peninsula in the Middle East.

On Tuesday, a blast in Pattani province’s Mae Lan district killed 1 of 6 soldiers on patrol. Officials say it was the first fatal bombing since the ceasefire began. Another attack occurred Wednesday at 5:30pm when a patrol squad of the 42nd Ranger Task Force arrived at Bang Maruad village. The squad was patrolling the area to keep the peace when the bomb was set off.

6 soldiers and a family of 4, including 2 children, were injured. Authorities believe BRN insurgents were responsible for the attacks, aimed at stirring up the calm situation. The BRN began direct negotiations for peace with a government team earlier this year, but the Covid-19 pandemic led to a pause in the negotiations.

The deputy spokesman for the military’s regional command told reporters that 2 of the soldiers struck by shrapnel on Wednesday are in serious condition at a Pattani Hospital.

“From the inspection of the site, we found the traces of an IED buried next to a cement column. An attack could happen at any time in the region, depending on timing. I believe the BRN still wants to mount attacks in order to show that they exist.”

Despite the incidents, he expects the BRN to work with government negotiators to bring peace to the region.

“In the next couple of years, I believe they will try to solve the issue by peaceful means.”

The government’s chief negotiator previously said he anticipated meeting with the BRN team next month in Kuala Lumpur if travel restrictions with Malaysia are lifted.