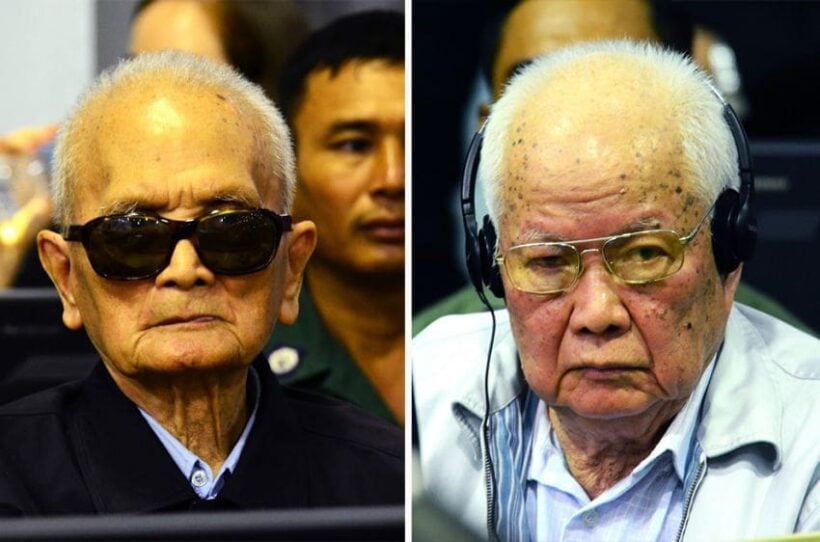 A UN-backed court has found two leaders of Cambodia’s murderous Khmer Rouge regime guilty of genocide. The judgement comes four decades after the regime which oversaw what became known as the Killing Fields, was overthrown.

Most of the victims of the 1975-79 regime died of starvation, torture, exhaustion or disease in labour camps. Others were simply bludgeoned to death during mass executions, many in areas just out of the Cambodian capital Phnom Penh.

Up to 2.2 million people, a quarter of Cambodia’s population at the time, died during the four year rule of the Khmer Rouge.

The Extraordinary Chambers in the Courts of Cambodia (ECCC), said Khmer Rouge “Brother Number Two”, 92 year old Nuon Chea and former President 87 year old Khieu Samphan were guilty of genocide against the Cham Muslim minority and Vietnamese people, and of crimes against humanity. The pair have been sentenced to life in prison.

They were already serving life sentences for 2014 convictions for crimes against humanity, in connection with the forced evacuation of Phnom Penh after the Khmer Rouge took power under their notorious leader Pol Pot in 1975.

There had been debate for years among legal experts at to whether the killings by the Khmer Rouge constituted genocide, as the vast majority of victims were fellow Cambodians.

The court found that during their rule, the Khmer Rouge’s policy was to target Cham and Vietnamese people to create “an atheistic and homogenous society without class divisions”, Judge Nil Nonn said in the verdict.

Hundreds of Vietnamese civilians and soldiers were also killed at the infamous S-21 interrogation centre, at a converted Phnom Penh school called Tuol Sleng, after being tortured to admit being spies. Tuol Sleng remains a gruesome tourist attraction and testament to the systematic torture and execution of those who ended up there during the brutal regime.

“The fate of all these prisoners was a foregone conclusion as they were all ultimately subject to execution.”

Both Khieu Samphan and Nuon Chea appeared for the court session but Nuon Chea was excused after 40 minutes complaining of back pain. He continued to follow the proceedings from his cell.

Khieu Samphan, looking frail and gaunt. He stood in the dock with the help of prison guards when Nil Nonn read the verdict.

The court, a hybrid UN and Cambodian tribunal, was set up in 2005 to bring to justice “those most responsible” for the deaths under the Khmer Rouge. The court has convicted only three people.

Its first conviction was in 2010 when it sentenced Kaing Guek Eav, alias “Duch”, head of S-21 where as many as 14,000 people were tortured and executed, to life in prison.

Two other Khmer Rouge leaders, Ta Mok and Ieng Sary, were facing charges but died before the case was concluded. Pol Pot died in 1998.