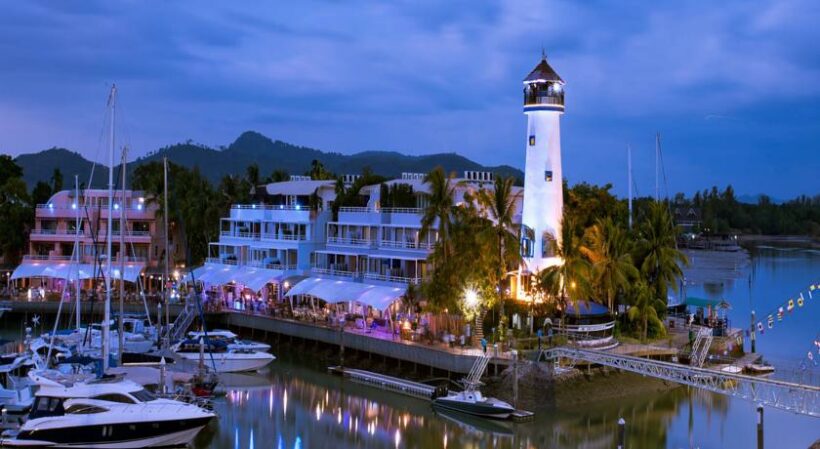 Saturday – Ahh, the weekend. Many things happening around the island. Tonight you have another Boat Lagoon Weekend night of music, crafts, food, entertainment and chilling. Starts at 6pm. Also the Kata Rocks Superyacht Rendezvous on today as the fleet makes its way from Kata Rocks to The Surin for a beach party – you’ll see some magnificent vessels making their way north along the west coast today. The Phuket King’s Cup is also still on off Kata today. Let’s check today’s main news stories…. 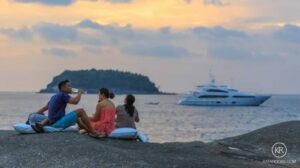 When your investigator used to work for you….

The national Anti-Corruption Commission president should step aside in the investigation of his former boss, General Prawit Wongsuwan, regarding the Deputy PMs possession of an extravagant wristwatch and diamond ring… this according to political academics and critics. While the anti-graft body has agreed to investigate the case involving what appeared to be a multi-million-baht Richard Mille watch worn by the junta’s deputy prime minister, many doubt that Pol General Watcharapol Prasarnrajkit will conduct a fair investigation.

Prawit, who did not declare any assets worth more than 200,000 baht when he entered the Cabinet in 2014, is suspected of not only concealing his assets from the NACC but also of “unusual wealth”, as the 72-year-old retired general does not appear to have any business investments. 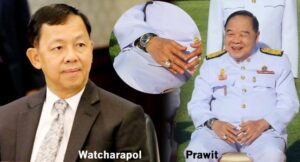 How much is that phone bill?!

The first incident involves the seizure of 50,000 unused DTAC SIM cards by customs officials at the Thai/Cambodian border yesterday.

The second case is about a complaint from a customer that her mobile phone signal was cut off on Dec 7 because she ran out of credit. After checking with DTAC, she found out that she was charged 461 trillion baht for phone services. That’s 461 with 12 zeros after it. We don’t think she’ll be paying that off with instalments! 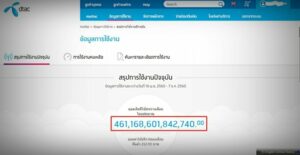 Deputy PM Somkid Jatusripitak is holding discussions with officials from a range of agriculture-related agencies in a bid to set the direction for fresh economic policies aimed at improving farmers’ livelihoods.

Officials have responded to Somkid’s urgent call for new strategies in line with the guiding principles of the sufficiency economy philosophy espoused by His Majesty the late King Bhumibol Adulyadej. The key concern, according to Somkid, is that farmers must have additional ways to earn an income after a harvest season.

Somkid says a committee would be established to create a central database for main crops such as rice, rubber, palm oil tapioca and fruit. The database would also enable producers to benefit from an early warning system of looming hazards for certain sectors. 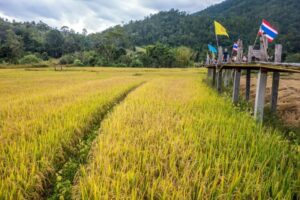 The Junta quartet were on hand to inspect some of the areas still inundated and chat to locals. They headed back to the capital last night. 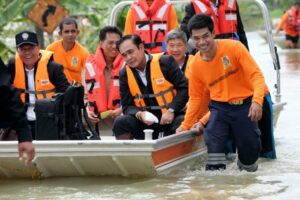 The National Anti-Corruption Commission has passed a resolution to submit a petition for the Supreme Court’s Criminal Division for Holders of Political Positions to revive three cases, two of them involving former PM Thaksin Shinawatra, after the passage into law of an organic bill which allows for trials of fugitive politicians to be held in absentia.

The new law allows for the Supreme Court’s Criminal Division for Holders of Political Positions to revive cases – which have been shelved because the defendants failed to appear for trial as ordered by the court – and renew the trials in absentia.

In one of the cases Exim Bank lent 4 billion baht to Myanmar to buy telecommunications equipment from companies affiliated to Shin Corp, owned by the Thaksin family. Former PM Thaksin, who approved the loan, was named the defendant in that case. 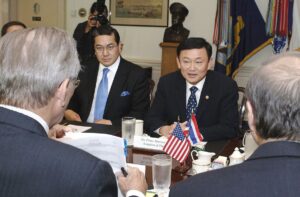 Road closures for the Phukethon

The Phukethon 42 kilometre marathon is being run tomorrow from Saphin Hin to Cape Promthep and back to Phuket Town. The event is scheduled to start at 3.30am… most runners will be back by sunrise tomorrow. More than 10,000 runners have been registered for Phuketon events over this weekend, of different running distances. There’s a full story about the road closures at phuketgazette.net HERE.