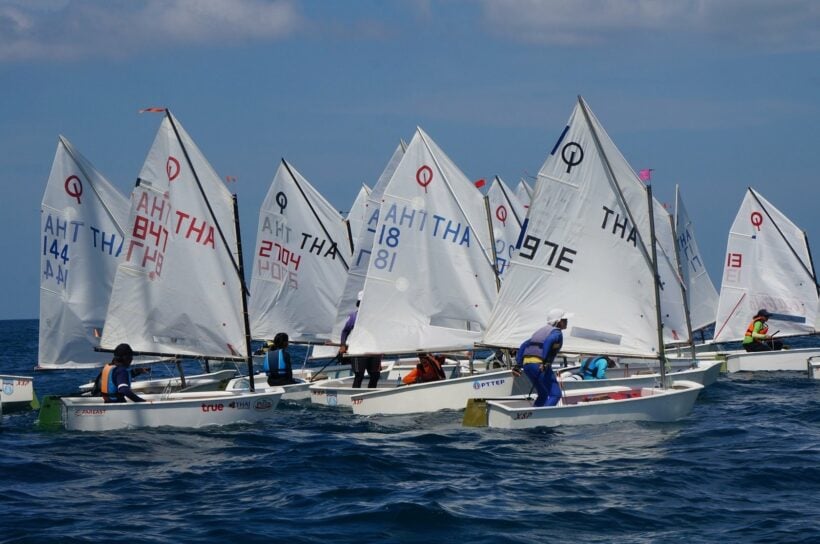 It’s been a week of consistently excellent winds (and gusts which peaked at 25 knots at times), but lighter conditions appeared for Day Four. This had the potential to alter standings heading into today, as well as tomorrow’s final race. Today also marked the conclusion of a great week of racing across all of the Phuket King’s Cup Regatta Dinghy class events, with its biggest fleet ever and much more of an international vibe.

The lighter conditions brought some changes across the board for keelboat and multihull racers. Ray Roberts and Team Hollywood were the first to beat the undefeated THA72 (skippered by Tom & Kevin Whitcraft) which they managed to do in Race 9. True to this week’s form however, Kevin’s team was back on top to take Race 10. In Race 11, Sarab Singh’s Windsikher team finally recorded a win.

Kevin seemed to enjoy a day in the punishing sun, though:

“Poor tactics cost us in the first race. We picked the wrong route and ended up tacking endlessly. We were right behind Windsikher at the finish. We won the second race and were second in the last, but we got one. You don’t mind giving them one or two, they worked hard for it!”. 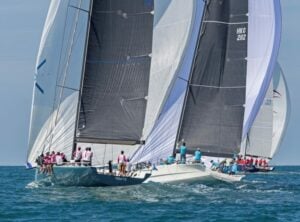 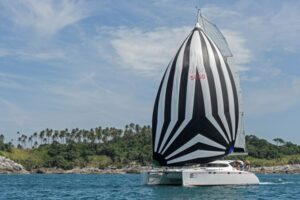 John Coffin, owner of Java Yachting, which owns 19 boats, many of which are competing in the regatta this year, said, “We are very well represented in the King’s Cup and are delighted to be able to be so engaged in this prestigious race. We’ve got My Judy competing in IRC2, Awatea in Modern Classics, Mermaid in the Modern Classics too, plus all four Pulse 600’s – that’s a great boat for progressing from dinghies. They ran on the big boat course this year, so were a bit overwhelmed with the 25 knot gusts, five above their comfort zone! The depth of quality and high levels of competition are incredible, and these are hallmarks of the Phuket King’s Cup Regatta”.

The International Dinghy class sponsored by Haad Thip Pcl. concluded today. Capt. Pornprom Sakultem International Dinghy Director spoke of the great success the dinghies have enjoyed as part of the larger regatta. He says, “The Dinghy success really happened through the thinking of the committee. We found that the regatta is so successful in terms of yachting, and is famous around world. But we wanted to improve the participation of Thai people in the keelboats and multihulls; typically 90% of crews are expats, so we had to think, how can we take Thai people to the regatta and be competitive? We went back to basics, following the ethos of our beloved HM the King, who once said that the sport of sailing makes you into a strong man (or strong woman, in the case of our many female competitors). So we sought to honor this legacy. Our youngest sailor, Nawinda Wangkaew Chamnantraiphop, is just six years old! In 20 knots of wind!”.

Working in his role with the Royal Thai Navy, Capt. Pornprom established a joint venture in China, and this year Chinese sailors are very well represented in Optimist training class. The China team was invited to join the King’s Cup, and Capt. Pornprom also took Thai sailors racing in Qingdao (East China Seaboard) for the first time. His plan is for the Dinghy regatta to match the larger keelboat regatta in scope and prestige, and has done an astounding job in achieving great success towards this goal. 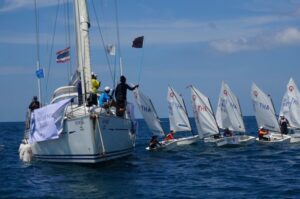 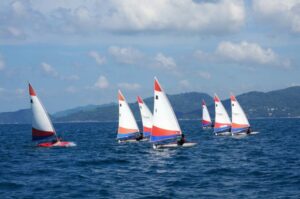 Road closures for the Phukethon Marathon on Sunday