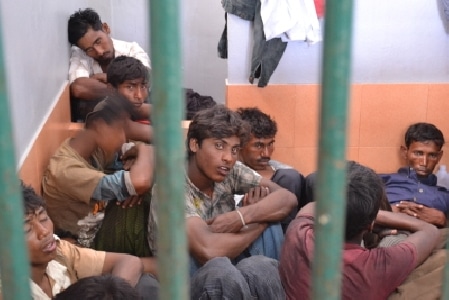 PHUKET: A boatload of 70 Rohingya refugees landed at Rawai Beach at the southern end of Phuket early this morning, only to be rounded up and taken to Chalong Police Station.

Duty Officer Boonlert Onklang of Chalong Police said he arrived at the beach with fellow officers at about 5:30am.

Within 90 minutes, police had arrested 35 of the refugees, who were wandering around the area.

“When they arrived, they had not eaten anything. We have provided them with food. Some of them are sick and have been given medication,” Chalong Police Superintendent Vichid Intharason told the Phuket Gazette.

“They told us there were 70 people [all men] all on the same boat, including those we arrested this morning,” Lt Col Boonlert told the Gazette.

“We have arrested 68 of them… We are now searching for the two who are still missing,” he added.

Col Vichid warned residents to keep an eye out for suspicious-looking people in the area, and to report them to the police.

He added that officers had yet to confirm whether Phuket, or even Thailand, was the refugees’ intended destination.

“Their answers are still confusing and unclear. We have not been able to confirm whether they intended to pass through Thailand to get to other countries or if they wanted to work in Thailand,” Col Vichid said.

“But from my experience of working in the Immigration Bureau, Rohingya mainly use Thailand as a way to continue their journey to other countries.

“They are facing problems with the Burmese government and they need to find a way out. Leaving by boat is the easiest way,” he added.

Any Rohingya arrested on Phuket are to be handed over to Immigration officials or to the Royal Thai Navy Third Naval Area Command, Col Vichid explained.

He added that it has yet to be decided on how and where – not if – the detainees will be sent back to Burma.

One Rohingya man, aged 18, told the Gazette through a translator that he wanted to go anywhere – except back to Burma.

All 68 of the refugees arrested so far have been transferred to the Phuket Immigration Detention Center in Phuket Town, where they will spend the night.

The men have had to remove their belts as a precaution.

To see PGTV raw footage of the Rohingya under arrest in Phuket, click here.