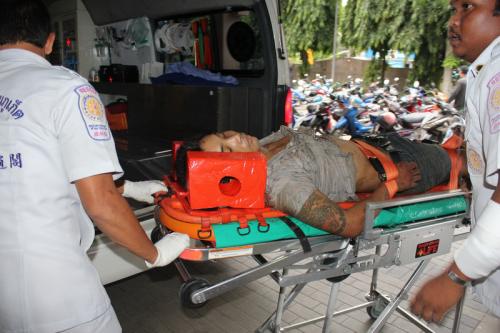 PHUKET: Police officers opened fire on a suspected drug dealer after he rammed his Honda Jazz into a police patrol pickup blocking his escape in Phuket Town early yesterday evening.

Police were following the Honda Jazz of 28-year-old Thaweepong Kerdpol, a suspected drug dealer, after they received a tip-off that he was in the Chalong area.

“The officers got out to ask to search the suspect’s car, but Mr Thaweepong accelerated at them, trying to go around the blockade,” Lt Col Prawit explained.

One of the officers, Sgt Maj Noppadol Boonyapijit, dived onto the bonnet of the fast-approaching Jazz in order to avoid being run down.

“Mr Thaweepong’s car rammed into one of the patrol vehicles. He then crashed into the traffic lights,” said Col Prawit said.

Sgt Noppadol managed to keep his grip on the car despite the collision with the police pickup. However, he sustained several broken ribs and a broken arm when he was thrown clear after the car crashed into the traffic lights.

During the attempted escape from police, officers opened fire on Mr Thaweepong’s car, hitting him in the right leg.

Police found 230 pills of ya bah (methamphetamine), 16.12 grams of ya ice (crystal methamphetamine) and 12.68 grams of marijuana in the car, which they seized as evidence.

“Mr Thaweepong was charged with possession of drugs with intent to sell, resisting arrest and attempting to kill a police officer,” Col Prawit said.

Mr Thaweepong, due to the severity of his injuries, was transferred to Songklanagarind Hospital in Haad Yai earlier today.

Mr Thaweepong appears to have been a repeated offender. The Phuket Gazette reported him being arrested 10 years ago, when he was 18 years old, after he was caught stripping parts off motorbikes parked at Vachira Hospital in Phuket Town (story here).