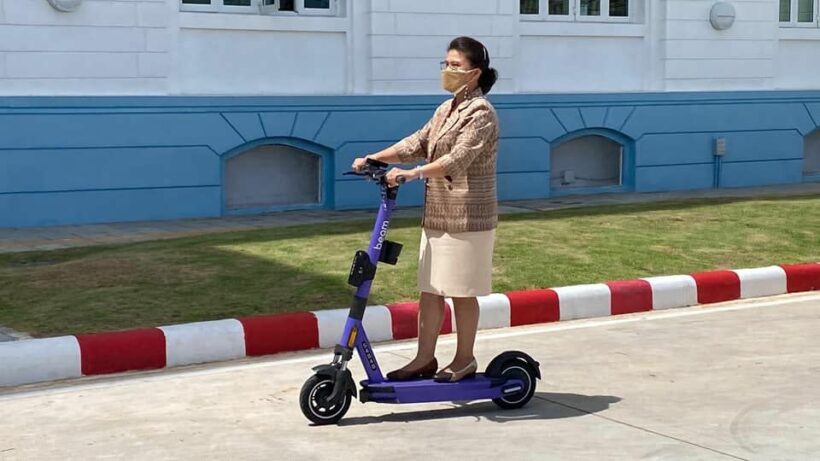 Phuket officials to use electric scooters around provincial hall for security operations, photo by PR Phuket.

Electric scooters were originally banned in the island province in February when four tourists in Patong were charged with using unregistered and untaxed vehicles after they drove electric scooters near a beach resort. A viral video of the event sparked criticism online among netizens who questioned why the police would arrest the tourists, instead of going straight to the source — scooter rental companies that have been allowed to operate in the city.

People caught riding electric scooters on public roads can be fined up to 10,000 baht. Since scooters are not recognised as vehicles by the Department of Land Transport, people caught riding them can also be charged with operating a vehicle without a valid license.

The Phuket News reports that local municipalities have yet to decide whether or not people can ride electric scooters in public parks. In February, after being informed that they would be held responsible in case of an accident, rental operators in Patong agreed to suspend all rentals.

Grant
Arrest them ! Not registered! Double standards!
Ramanathan.P
Standards can be deviated with a certain way of approach over the issues....

Guest1
9 minutes ago, Grant said: Arrest them ! Not registered! Double standards! I would like them to start with this totally unneeded "ATV's" or "Quad's, with just a rear wheel drive.

Guest1
4 minutes ago, Ramanathan.P said: Standards can be deviated with a certain way of approach over the issues.... That is standard, here!

Get the best quality dental treatment at Edelweiss Dental House

Thailand Pass to be dropped on June 1 | GMT