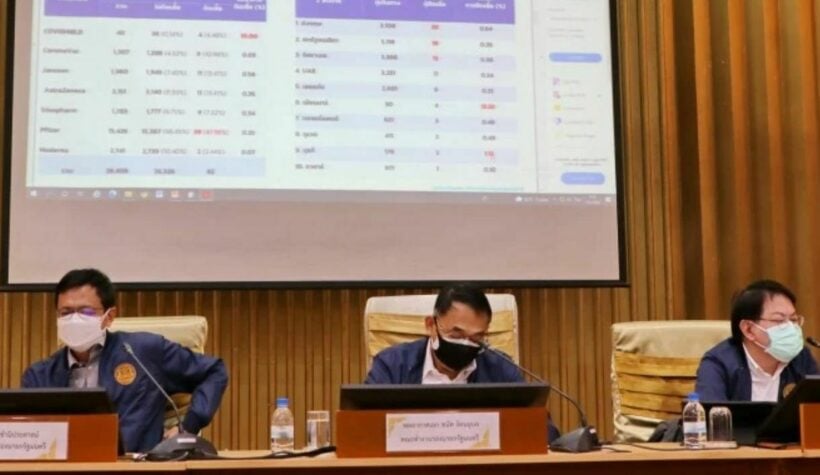 A Phuket Provincial Hall meeting chaired by 3 advisors to Deputy Prime Minister Supattanapong Punmeechaow focused on 5 main issues of paramount importance to the people of Phuket and the tourism industry. The 3 advisors listened to the issues and are tasked with delivering details to key federal government officials back in Bangkok including the Deputy Prime Minister to report directly to PM Prayut Chan-o-cha.

The five issues that were the focus of the meeting addressed Covid and vaccination, as well as the suffering of boutique hotels, entertainment venues, and restaurants that can’t serve alcohol.

The PPHO discussed generally positive numbers for the Sandbox and therefore proposed several easings of restrictions. They called for a reduction from 3 Covid-19 tests to only 2 tests during the first 14 days after arrival. They also suggested relaxing what constitutes high-risk people to avoid planefuls of people being sent quarantine without being infected.

Recognizing the expenses that most insurance policies won’t cover, the PPHO suggested amending this rule that destroys holidays and adds a huge financial risk to potential travellers.

Their reporting at the meeting explained that Covid-19 daily infection numbers in Phuket are consistently above 200 per day, but are mostly local residents and not tourists. They stated that 85% of infections are mild despite the 11 deaths in the last week, and with only 88 Covid-19 infections out of over 29,000 Phuket Sandbox internationally travellers, the risk is reasonably low.

32 Sandboxers tested positive upon arrival in Phuket, 27 infections were uncovered on their second test a week later, and 6 were found on the final test on day 12/13 after arrival. 24 Sandbox travellers are reported to still be waiting for conclusive confirmation of Covid-19 infection.

The meeting discussed the rollout started in Phuket for booster shots as a third vaccine for those who had already received 2 doses. The programme was launched yesterday, focusing on frontline medical workers with a goal of 3,500 boosters in the first round. The third jab is an AstraZeneca vaccine given to those who received 2 Sinovac vaccines previously.

A recent problem for the Sandbox is a long-time grey area in Thai law for small boutiques and buildings operating as hotels. A 3-year amnesty waiver for these small businesses expired last month, and some are seeing their SHA Plus certification cancelled now, forcing them to close. The Phuket Boutique Accommodation Consortium requested again at the meeting that this amnesty be reinstated for 3 more years.

The Covid-19 pandemic has rendered many unable to comply with many rules and forced them to close for Covid-19. But while this amnesty expiration renders them unable to open, they are also no longer eligible for any government relief as the hotel sector is allowed to open even though their individual business cannot.

Many business leaders are pushing yet again for the federal government to lift the nationwide alcohol ban, at least in respect to allowing restaurant owners to serve beer and cocktails and allow tourists to have a drink when they are out for dinner. Representatives of the industry attended the meeting on behalf of all the affected businesses in Phuket.

Entertainment venues are usually the first sector closed and the last one to reopen when Covid-19 restrictions are enacted as they are considered a non-essential and also high risk for Covid-19 spread. But local businesses pushed for their reopening as tourism struggles to rebound, no doubt hampered by a moratorium on nightlife, drinking and partying that Thailand and Phuket are known for, especially Patong.

DollhinSpirit
I was wondering during these periods of reduced availability of alcohol if the drunk driving death rate has gone down? Anyone know where that data is available?

AlexPTY
3 hours ago, MrStretch said: Fancy, the Irish doing something sensible and logical.  Wonders never cease They simply trying to leave with covid. I don't see why everyone else denying this simple fact. It's not going away

JohninDublin
On 9/11/2021 at 12:59 AM, AlexPTY said: they are chewing the same gum. interesting to see tho, that even UK put Thailand and many countries on the red list, Ireland just announced something completely different: "Unvaccinated travelers from Thailand to Ireland must…

“Dark red” zone curfew, other rules remain until the end of the month