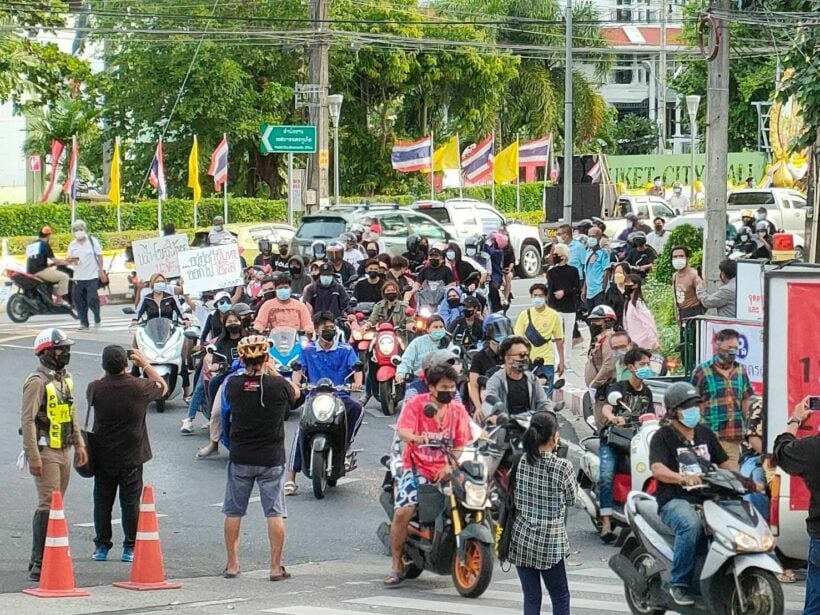 Hundreds of cars and motorcycles drove through Phuket in a so-called “car mob” rally, calling for the resignation of PM Prayut Chan-o-cha and the procurement of mRNA Covid-19 vaccines. Many have criticised the Thai government as it grapples with the most severe wave of Covid-19, a limited supply of vaccines and the emergence of the highly transmissible Delta variant.

Earlier this month, red shirt activist Sombat Boonngarm-anong held a massive car protest in Bangkok. People honked horns as they drove through the city to put pressure on government coalition parties to oust the prime minister. The Red Shirt political movement in Thailand was formed after the 2006 coup to protest the military takeover. In 2014, Prayut, who was an army general, seized power in another coup.

The student-led Free Youth movement, which held many of the pro-democracy protests over the past year, also held a protest about a week ago at Bangkok’s Democracy Monument, despite the disease control rule prohibiting gatherings of more than 5 people. Police responded with water cannons, tear gas and rubber bullets.

Since last year, the youth activists have been calling on monarchy and government reform as well as the resignation of Prayut. But last week, the Free Youth announced 3 new demands…

In Phuket’s Saphan Hin area yesterday, hundreds of people honked horns and waved banners as they drove their cars to Phuket City Hall to submit a letter with their demands to Phuket Governor Narong Woonciew. They also demanded for Prayut’s removal, budget cuts, and mRNA vaccines. The demonstration was organised by the Phuket People’s Party – Phuket Liberation Group, known in Thai as Khana Ratsadon. Protests had signs saying “Save Phuket” and “Phuket Wants Peace”.

The letter, which listed the exact same demands as Free Youth, by Vice Governor Vikrom Jakthee who said the letter would be given to the governor.

In a statement posted on Facebook, the Khana Ratsadon group said…

“We would like to send this letter to you and the citizens under your care, including tourists who are deciding to come to Phuket in accordance with Phuket sandbox measures, to know that our activities are not intended to cause chaos and cause your citizens to lack confidence in making a decision to travel in Phuket or affect the lifestyle in Phuket.

We just want to send a distress signal and request of the people of Phuket to send it to the Thai government with 3 demands from the people as follows:

We will continue to expand and progress. Because of knowing that if we ignore politics, we will end up with an abusive government that will lead us to failure and disaster.”

gummy
1 minute ago, Chaimai said: Indeed.......and they will not give that up lightly. Nor should they get of lightly either

dmacarelli
Hey Prayuth. What about your promise to fight corruption, that you made seven long years ago? I doubt if you remember back that far, but when you and your clowns launched a coup, it was ostensibly to restore law and…

Golden-Triangle
27 minutes ago, dmacarelli said: Hey Prayuth. What about your promise to fight corruption, that you made seven long years ago? I doubt if you remember back that far, but when you and your clowns launched a coup, it was ostensibly…
Chaimai
10 hours ago, gummy said: Nor should they get of lightly either   Hmm... but they will.   12 coups so far and I don't think anyone has been called to account.   Get rid of this one and another…

ChristyS
On 7/26/2021 at 2:18 PM, AlexPTY said: And I demand Phuket to be declared a sovereign country, because they already have everything and deserve the best  I've often mused expats should do a funder and buy it- Thais ruin it…