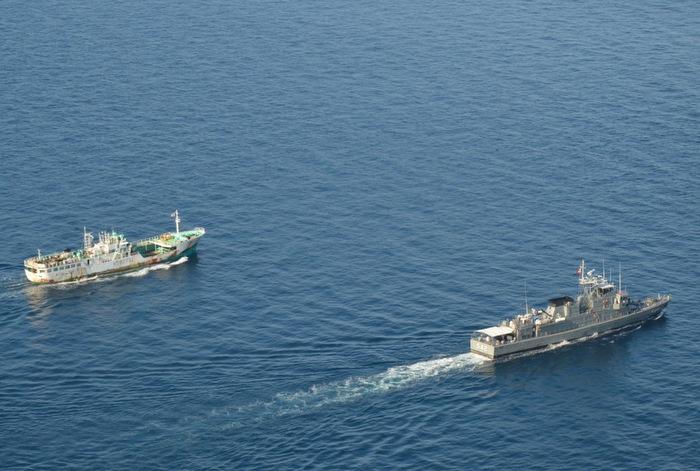 Mook Anda 018 and Mook Anda 028 arrived at the Phuket Deep Sea Port on Saturday, where Rear Admiral Kittipong Rumakom, deputy commander of the Royal Thai Navy Third Area Command, was waiting for them.

“All relevant officials are now investigating the case after the boats failed to report at Phuket’s Port-in Port-out center when they departed,” R/Adm Kittipong said. “Additionally, they are being investigated for illegally fishing in international waters.”

Mook Anda 018 was crewed by a total of 28 people from China, the Philippines, Indonesia and Vietnam. The captain was named as Huang De Tian.

Mook Anda 028 was crewed by a total of 27 from China, the Philippines, Indonesia, Myanmar, Vanuatu and Vietnam. The captain was named as Zhou Feng.

Last week, Phuket officials arrested 37-year-old Thanongsak Raksawong, who was in charge of the two boats, after the Crime Suppression Division alerted Marine Police of his involvement with the vessels (story here).

A Decade Ago: Soi dog woes as medical tourism grows