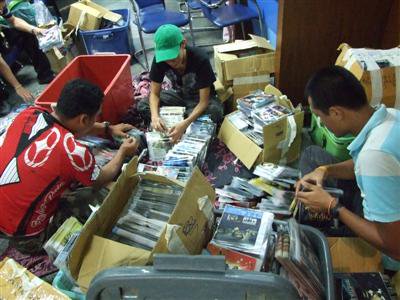 Officers at Phuket City Police Station last night were busy counting up a large haul of counterfeit CDs, DVDs and music videos seized in a raid on four stalls at the Phuket Variety weekend market on Wirat Hongyok Rd in Wichit earlier that day.

Eight people were arrested and will be charged with the sale of goods in violation of the Motion Picture Video Copyright Act of 2008, receiving the benefits derived from such sales, and violating Section 271 of the Criminal Code that prohibits the sale of counterfeit goods using deceitful means to trick consumers into believing they are genuine.

Among those arrested was 28-year-old Kathu resident Pissanupong Lao-dee, who admitted to operating all four stalls.

The raid followed numerous complaints about copyright infringement at the market, which has emerged as the island’s premier weekend market in recent years following the decline of the old weekend market on Phang Nga Road.

In addition to scores of illegally produced discs, police also seized a variety of electronic equipment used to promote them.

The raid followed a similar action at 1:30pm on Friday at the OTOP market on Rat-U-Thit 200 Pi Rd in Patong.

Some 30,000 items of counterfeit apparel and other items, valued at about 15 million baht, were seized.

CSD Acting Commander Sutthisarn Pakdee-naruenart held a press conference at Kathu Police Station at about 5pm the same day to announce the raid, which was prompted by complaints from the Bangkok-based Hardy Right LC Company and the other 11 companies licensed to sell internationally branded goods in the Kingdom.

All 21 of those arrested confessed to selling pirated goods in violation of copyright law at the market.

The latest raids followed a crackdown order issued by Commerce Ministry deputy director Alongkorn Ponlaboot in the run-up to a meeting tomorrow with US trade officials, he said.

Thailand is still ranked in the Priority Watch List according to section 301 of the US Trade Act.

Failure to get off the dreaded Priority Watch List puts Thai exporters at risk of having to pay higher import duties for products entering the US, one of its major trading partners.

If no action is taken on the sale of counterfeit goods in the Kingom, Thailand will lose out, Mr Suttisarn said.

Describing Kathu as a “red zone” in the war against piracy, he said Patong and some other areas in Phuket will remain under close scrutiny.

Various resort islands off the coast of Surat Thani and locations in Songkhla province will also face crackdowns, he added.