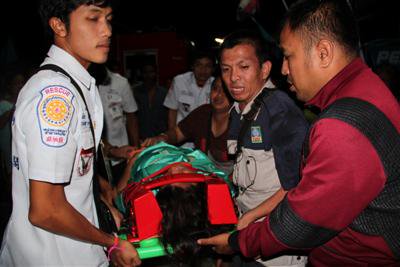 PHUKET: Three homes in a public housing community in Phuket Town were damaged last night in a fire that took firefighters about one hour to extinguish.

The fire broke out at about 9pm in a home on Soi 9 of the Saphan Ruam 2 Community, on the east side of Phuket Town near the Phuket Provincial Administration Organization (PPAO) Hospital.

Phuket City Municipality firefighters had problems reaching the blaze in the densely-settled community, but after about an hour they eventually managed to contain the spread of the fire to just three homes.

The fire is thought to have started in home number 12. Nisa Chuenrod, the 40-year-old owner, said she was behind the building doing some housework when she noticed smoke coming from the second floor.

“I ran in and got my mother and husband out, then watched as the fire quickly spread to other houses. Luckily no one in my family got injured,” she said.

The only injury reported was to her neighbor Sunee Buathong, a 51-year-old resident of house number 10 next door. She passed out and was sent to hospital for treatment.

Mayor Somjai said she would send teams to estimate the cost of the damages and investigate the cause of the fire as soon as possible.

“I will send workers from Phuket City Municipality’s Division of Social Welfare to estimate the damages tomorrow. As for the cause of the fire, I will have to ask the police to investigate,” she said last night.

The Saphan Ruam community was first established in 1980 with help from Phuket City Municipality. The city rented the land from OrBorJor in order to find a replacement area for a community of squatters living near the Muang Phuket Municipal School.