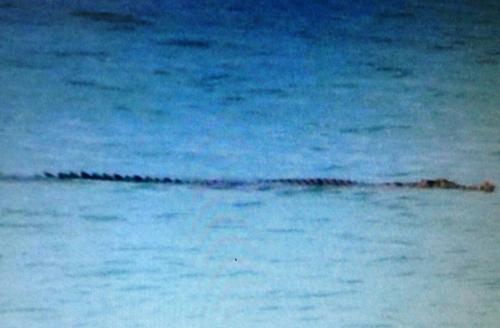 The alarm was raised at 8:30am by a staffer at the Maikhao Dream Villa Resort and Spa Phuket, at the southern end of Mai Khao Beach (map here).

“Tourists and local villagers were frightened. They couldn’t stop looking at it,” he told the Phuket Gazette.

Pakkariya Khaewumporn, 24, a staffer at the Renaissance Phuket Resort & Spa, managed to take a photo of the crocodile while it was swimming just offshore.

Mr Kritsada explained that he and fellow rescue workers took a boat out and kept the reptile under observation for about three hours.

“It was about 2.5 meters long, but we could not identify exactly what type of crocodile it was,” he told the Gazette.

Every time the officers neared the reptile, it dived and disappeared from view.

“We couldn’t get near enough to the croc to catch it because the noise from the boat’s engine warned it that we were coming near, causing it to dive,” Mr Kritsada said.

“The lake is connected to the beach. It might have been disturbed by a fishing boat on the lake or left the lake with the fast-flowing water as the tide went out,” suggested Suwan Mingpijarn, a local villager.

Meanwhile, the crocodile remains at large.

If you believe you have seen the predator in the wild, please call the Mai Khao OrBorTor rescue center at 076-348201 or the Phuket Provincial Fisheries Office at 076-212460.