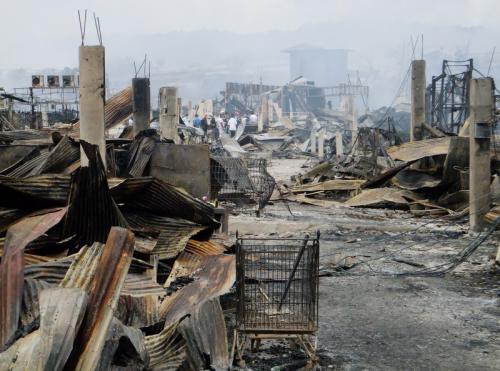 PHUKET: None of the 100 Myanmar nationals who allegedly quit SuperCheap after an enormous blaze demolished the megashop (story here) reported to the Phuket Provincial Employment Office (PPEO) by the November 1 deadline (story here).

“The workers were required to report their resignation to us by November 1, but until now none of them have shown up,” PPEO chief Yaowapa Pibulpol told the Phuket Gazette on Saturday. “And I have not heard anything back from SuperCheap concerning this.”

Ms Yaowapa has reiterated to SuperCheap the necessity of ensuring their Burmese staffers report to the PPEO.

“I believe they might still be busy checking with their employees at this time, so I have extended the deadline by a week,” she said.

If the Myanmar nationals do not present themselves, Ms Yaowapa confirmed that she would be forced to contact SuperCheap to establish the cause of the delay.