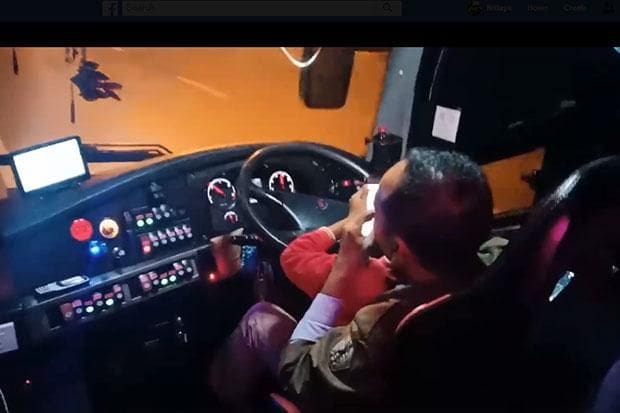 A last minute booking for a Phuket to Phattalung bus has turned into a scary video record of an inter-provincial bus driver’s habits.

The driver is coming under fire after being caught on video, whilst responsible for a bus full of passengers, with his son sitting on his lap and making, what appears to be, live video chat calls.

The post from “Mango Maimai” has already had more than 1,200 shares with more than 150 people sharing their comments.

You can watch the videos HERE.

The video was captured after the last-minute passenger ended up having to sit in an area just behind the driver as all the other seats were booked on the route that evening that departed Phuket at 9.15pm.

(Translated) “The driver kept teaching his son to drive. Even worse, he was making a video call from his tablet phone. I decided to get off the bus at the Tha Chatchai checkpoint.” (The checkpoint is about 500 meters from the northern end of the island where all traffic has to pass)

She said in her post that the diver “doesn’t care for the safety of the passengers on board. This is a passenger bus, not a children’s playground.”

“How many lives are in your hands?”

Commenters have denounced his driving as unsafe and putting the lives of a bus full of passengers at risk. Many called for the driver to be fired.

The bus company Phattalung Thaksin Company has not made an official comment about the post at this time.