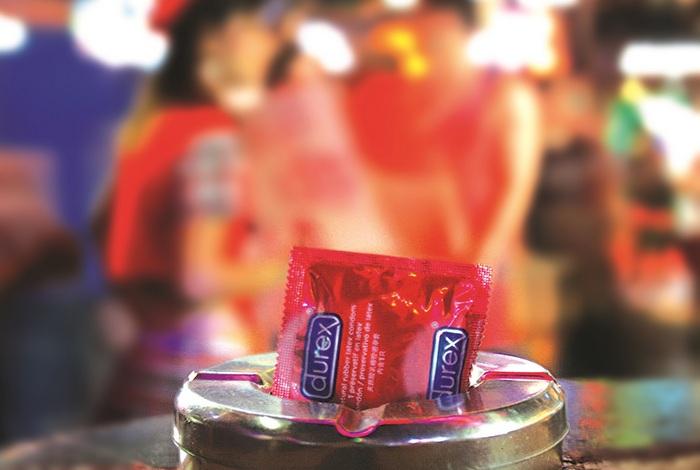 PHUKET: Eighteen year old ‘Nok’ is a normal, healthy-looking school girl struggling to cope with a dark past brought about by the shame and stigma of being diagnosed HIV positive.

She found out she had contracted the disease when she became pregnant at 15 years old.

“I was scared and confused. I asked my parents for help and they made me abort the baby,” she recalled.

“I live and study in Phuket because it’s hard to be around the people I know back home in Bangkok. My parents check on me regularly and I go to school like other girls. However, not all my friends know I have HIV.

“I am trying to live my life as normally as I can, but I don’t want to get romantically involved with anyone as it will be awkward when they find out about my condition. I feel that people treat me differently when they find out the truth,” said Ms Nok.

Patong bar worker ‘Ae’ is another woman struggling to cope with the disease. At 32 years old, Ae already looks worn down from a lifetime of struggling to support herself through drug addiction as well as dealing with having AIDS. From an early age she worked in Pattaya before moving to Phuket.

“I had a very careless attitude about my health – I drank, shared needles while doing drugs and had unprotected sex”.

Ms Ae admitted that despite asking her customers to use condoms, not all of them agreed to do so. “I did not resist much because I did not want to lose clients. I did not make wearing condoms a strict rule for my customers because I wasn’t really aware of the dangers of HIV then,” she said.
One of the worst things AIDS sufferers have to deal with is rejection by society.

“People’s attitudes towards me changed when they found out I was HIV positive; not so much my friends and coworkers – they didn’t treat me any differently – but my family disowned me and kicked me out of the house, despite the fact that I had helped to build it,” said Ms Ae.

“I had to return home when I got very ill about four years ago, but my stepmother said she couldn’t stand living under the same roof with me and chased me out of the house. I had nowhere to go, so I moved here to Phuket.”

“Society does not accept HIV patients. Unfortunately, I can neither change my fate, nor the way people treat me,” said Ms Ae.

Nok and Ae are just two of the thousands of people in Phuket alone that are living with AIDS. The province has the highest incidence of Human Immunodeficiency Virus (HIV) in Thailand, the latest Phuket Provincial Health Office (PPHO) statistics reveal.

Incidences of AIDS are more common among men at about 66 per cent. Over the years, there has been 1,886 fatal HIV-related cases on record, of which a staggering 94 per cent were AIDS-related.

Although the numbers are alarmingly high for a single province, local health officials said the figures didn’t necessarily mean doom and gloom in paradise.

PPHO deputy chief Arnon Kaewbumrung said the diversity of the island’s transient population means that many of the cases are not locals so the figures are distorted.

“It’s not always easy to keep track of every single case, but we have been diligent in our record keeping over the years and that is one of the main reasons the highest figures in the country are recorded here,” Dr Arnon told the Phuket Gazette.

“Our records are cumulative but the majority of people living in Phuket are not actually registered as Phuket residents. There are a lot of people – Thais and foreigners – coming in and out of Phuket on a regular basis.

Some of them contracted the virus elsewhere but were then tested in Phuket, which means they are also added to our database of all recorded cases,” said Dr Arnon.

Dr Arnon stressed that the high number of AIDS cases in Phuket was not a bad omen.
“What’s important is that we are keeping extensive records of our patients and ensuring they have access to treatment. In the meantime, we are also making efforts to raise awareness of HIV and AIDS,” he said.

The PPHO has distributed close to a million condoms to the general public over the past three years, including 94,900 handed out to teenagers as part of the ‘Young Love’ campaign.

Using condoms as protection is the most effective way to prevent the spread of the disease but there is still a negative attitude towards them, said Dr Arnon.

“Some people complain that using protection gives them an unnatural feeling, which discourages intimacy, while others feel unsure about the quality of condoms.

Others say using condoms leads to trust issues as they don’t want their partners to think they have sexually transmitted diseases (STDs).

“Attitudes need to change,” he said.

“Even though it is common knowledge how devastating HIV and AIDS can be, yet how easy it is to take preventative measures, the stigma surrounding condom use means many people still won’t take these simple steps to keep themselves safe.

Society labels condom use as a sign of promiscuity, when in fact, it is the smart and cautious thing to do,” said Dr Arnon.

People in the gay and transgender community in Phuket are the most at risk of contracting AIDS and a group the PPHO is concerned about.

“The incidences of HIV in this group is rising but they are the ones getting the least help from,” said Dr Arnon.

A 2011 study found that increasing sexual activity among the youngest members of Phuket’s transgender community was leading to an alarming rise in HIV rates.

Dr Sak Tanchaikul, former chief of PPHO, said he was deeply concerned about HIV infection rates among ‘men who have sex with men’, which his agency members refer to collectively as ‘MSM’.

Sex is often an uncomfortable topic between parents and children, but experts feel that talking about it could make a huge difference in people’s life-long attitudes towards sex.

“Sex education is very important for children. Parents must make it their duty to educate their children on the subject.

Unexpected pregnancies and STDs are common issues in Thailand, so parents must engage their children, particularly teenagers, in healthy and open-minded discussions about the subject,” said Dr Arnon.

“It is easy to blame schools or friends for your children’s behavior.

However, the primary responsibility always lies with parents – there are no excuses on that front.”

According to a recent report by the PPHO, there have been significant advancements in HIV medication in the past decade with over 30 known anti-virus treatments now available.

Since 2000, the Ministry of Public Health has been distributing anti-virus medications, and urging people to get tested and access their services.

They also reported that a new AIDS vaccine is in the research and development phase.

Experts want to banish the notion that being diagnosed with HIV is necessarily a death sentence.
Thai AIDS Society experts reported a case where a man was diagnosed and started treatment for HIV in 1996, at the initial stage of the disease. He religiously followed his medication regime for more than a decade, and eventually tested negative for HIV in 2013.

Other studies have confirmed similar success stories worldwide, reaffirming the need for awareness and regular testing, the PPHO report said. Starting a treatment regime as early as possible enhances your chances of successful recovery.

Being scared of getting tested won’t make the problem disappear – it will, in fact significantly reduce your chances of successful treatment, the report added.

Efforts to raise awareness and give people access to treatment have included the setting up of an AIDS hotline (1663), as well as children being allowed to be tested without having to get their parents’ consent. However, HIV and AIDS remain taboo subjects in Phuket.

The PPHO report clearly states that living with an HIV/AIDS patient does not mean you will automatically contract the disease. Yet, those living with the reality of the disease know how difficult it is to change people’s minds.

For those who cannot turn to family or friends, the Life Home Project Foundation in Koh Sireh is a lifeline. The foundation provides free food, shelter, clothing, medication and even scholarships for children.

The foundation’s project manager, Noppadol Poungpun, said many HIV-positive women are rejected by their families and communities, so we take care of them and their children at our centers.

“It’s a better environment for the women and children to be in. Nobody treats them differently here,” he said.

“We provide a venue for them to get advice and access to treatment. We also help women and children to adjust themselves in society. Our house can accommodate up to 30 people. Right now, we have 19 women and children living there. Some children are HIV patients themselves, whereas others are orphans whose parents died of the disease.

“We also provide services to people who don’t live at our shelters. There are those who initially lived here but moved out when they got better, both physically and emotionally, and were able to become contributing members of society,” he said.

Mr Noppadol said that while cases of HIV are still on the rise, it is a subject that many still take lightly, emphasizing that HIV-positive patients don’t always look haggard and worn. People mistakenly believe that HIV couldn’t possibly have anything to do with them, but nobody can know for sure until they’ve been tested.

“HIV patients can live normally for a long time if they strictly follow their medication regime. We now have anti-virus medications that prevent transmission of the virus from mother to child during pregnancy.

“I am glad that both government and private sectors are providing support for HIV patients. Additionally, there is a host of useful information available on the internet.”

Mr Noppadol said that although society is gradually opening up on the subject of AIDS, it was, in his opinion, more important for patients to learn to live happy, healthy lives without being a danger to themselves or others around them.