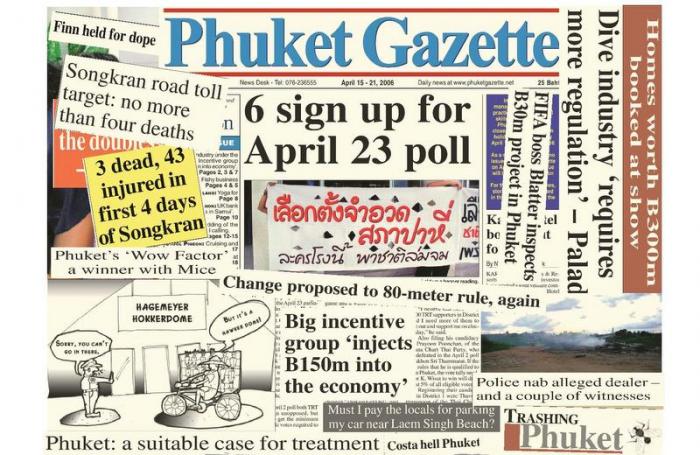 PHUKET: Despite having significantly fewer people, fewer cars, fewer motorbikes and fewer tour buses on the island ten years ago, the Songkran ‘Days of Danger’ safety goals were much more reasonable.

As has become the trend over the last few years, Phuket is joining the nation in a ‘Seven Days of Danger’ campaign this year with the unrealistic provincial goal of having zero road deaths. However, in the April 15-21, 2006 issue of the Phuket Gazette, the goal was to have no more than four people die on the roads and no more than 53 people seriously injured during the 10-day campaign.

In 2004 and 2005, only three people died during the holiday campaign. However, hundreds were seriously injured. In recent years, with death tolls often outpacing the unrealistic goal of ‘zero deaths’ by day one of the campaign, even police officers seem to be throwing up their hands and saying, ‘We’re doing the best we can’.

Setting unrealistic goals in anything is a common mistake most of us suffer at the new year. How many people made it to the Chinese New Year carrying on their New Year resolutions? Anyone make it to the Thai New Year? So, officials are suffering a common problem that has simply crept in somewhere over the last 10 years.

The real problem is that unrealistic goals mean we are accepting failure. Nobody, and I mean nobody in their right mind, will haul the Phuket police over the coals if someone dies on the roads during this year’s safety campaign. With such an acceptance of failure, we are really only around the bend from creating an entire road-safety culture where failure is not only accepted, but expected.

As the April 15, 2006 issue of the Gazette went to print, we were already four days into the 10-day campaign with three dead and 43 injured. Unfortunately, sometimes we even fall short of realistic goals.

Though the goals have changed in Phuket over the years, some of the headlines haven’t. “Dive industry ‘requires more regulations’ – Palad,” reads a headline on page two of the Gazette a decade ago. The ongoing battle to understand and regulate the dive industry was a point of contention even back in 2006, with officers claiming that because of the dive industry’s importance to the tourism industry as a rich source of revenue, the government should regulate operators more rigorously.

The issue at the time – different from the current issue of diver safety, which has tarnished the industry over the last six months – was whether or not dive companies were being operated legally: were they registered businesses with Thai ownership, did they issue work permits for foreign employees, were they paying their taxes, and so on.

“We don’t think that these regulations [put in place to ensure dive shops are running legally] will deter dive operators from investing money in Thailand,” said Phuket’s Chief Administrative Officer (Palad) at the time.

“In the end, they’ll thank us, because we’ll get rid of the companies that give the industry a bad name.”
Ten years later, it’s easy to find lawfully registered dive company owners bemoaning the flyby operators that continue to damage the industry’s reputation. So, the Palad’s point remains valid.

Unlike when the April 16-22 issue of the Gazette went to print, where the wet, wild fun of Songkran was ahead of us, the April 15, 2006 issue saw editors and reporters already in the thick of it.

So, in full Sonkgran spirit, the Gazette closed for the holidays – editors either ready for a well-deserved break or simply not willing to leave home for fear of being inundated with water. With the island’s premier English-language media company’s doors closed, there was no April 22 issue of the Gazette.

However, worry not. As internet and social media have stoked the flames for media consumption throughout the world, the Gazette editors won’t abandon you for the holidays – they will ensure you can get the island’s top stories on Facebook, in the Gazette Online, and, of course, in print.

Opinion: Will clubbing Phuket’s beach venues prove to have been worth it?