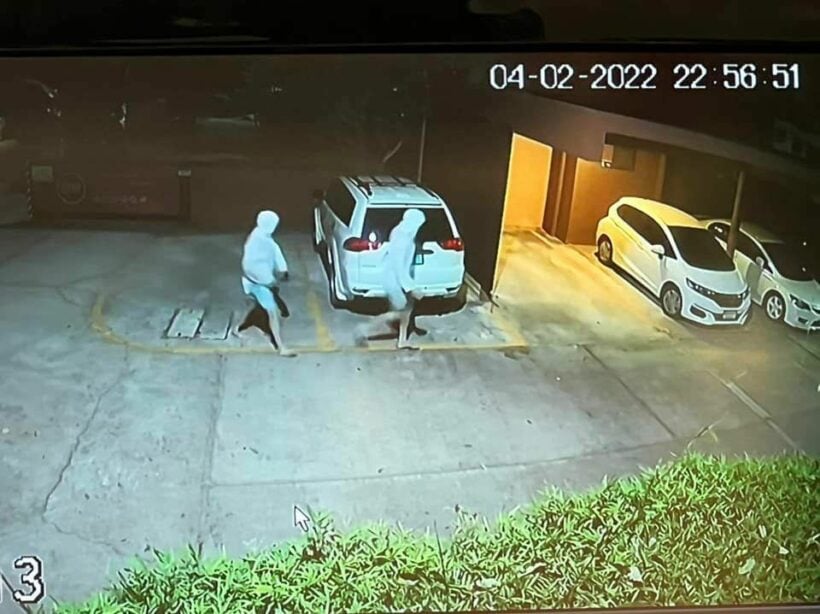 Police say they’ve obtained surveillance camera footage showing the two suspects in the Jimi Sandhu murder case in Phuket preparing to leave the country at Bangkok’s Suvarnabhumi Airport. Sandhu, who was born in India, was a notorious gangster in Canada and was deported for “serious criminality.” He entered Thailand last month by private jet and was found dead with more than 20 bullet wounds outside a villa in Rawai last week.

The two suspects were spotted on CCTV footage by the Rawai villa wearing white hoodies. Now, police say they have footage from the Bangkok airport showing the two suspects. Reports say the men were travelling separately on different flights, but both left the country the night of February 6.

It’s unclear how the men travelled from Phuket to Bangkok, but they arrived at the Suvarnabhumi Airport by taxi. They departed on different flights. Reports on their destinations are inconsistent. Some Thai media reports say both of the men booked flights to Canada, while others say they travelled to countries in Europe.

Police, who have not identified the suspects to the media as the investigation is ongoing, say the men entered Thailand on December 18. Reports say the suspects are believed to be Canadian citizens.

Yesterday, investigating officers found two guns they suspect were used in the killing. The guns were found underwater at a beach by the villa where the shooting happened. The firearms were registered under two Thais the media say are “influential” people. Officers say the gun owners will be asked to come in for questioning.

Jimi Sandhu was a notorious criminal in Canada. He entered Phuket on January 27 by private jet, carrying a fake passport with the name “Mandeep Singh.” Thai media reports that Sandhu first attempted to enter Malaysia, but he had problems related to his passport. Officers are also investigating to see who checked Sandhu’s passport and allowed him to enter the country.

ThailandBob
8 hours ago, harry1 said: would had thought the authorites know exactly the destination of these two as flying nowadays you have to have so many travelling documents to fly My thoughts exactly. There are plenty of paper trail leads…

Lowseasonlover
9 minutes ago, ThailandBob said: My thoughts exactly. There are plenty of paper trail leads generated flying out. Eventually, the RTP will identity these two. Do you think they will bother chasing this up now?

ThailandBob
1 hour ago, Lowseasonlover said: Do you think they will bother chasing this up now? Yes. I'm guessing that Canada is already them to investigate.

Lowseasonlover
6 minutes ago, ThailandBob said: Yes. I'm guessing that Canada is already them to investigate. Thats if they went to Canada
harry1
11 hours ago, Lowseasonlover said: Do you think they will bother chasing this up now? not if they trying to lure India tourist