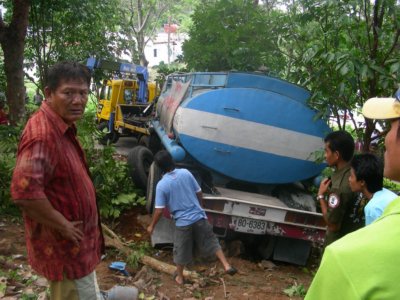 CHALONG-KATA: A woman on her way to work at a hotel in Kata was killed this afternoon when she was struck by a water truck that crashed into a pickup truck and her motorcycle before plunging down a steep embankment on the hill between Chalong and Kata.

Police believe K. Benjarat was on her way to work at a hotel in Kata when the accident occurred.

K. Benjarat was riding her motorbike behind a pickup when the water truck, traveling in the opposite direction toward Chalong, crossed over the dividing line and crashed into the side of the pickup.

Police said that the truck then swerved, but hit K. Benjara’s motorbike head-on, knocking her – but not her motorbike – clear off the road.

The crash occurred near the Phuket Muay Thai Camp and Gym.

The driver of the pickup truck suffered minor injuries.

On the side of the water truck was a banner that read, “Project to help drought victims, Karon Municipality”.