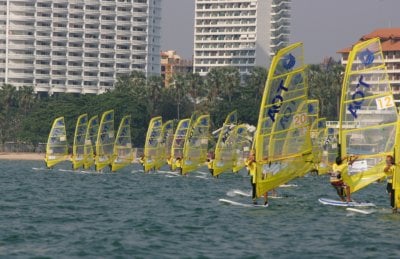 Competitors will race along the west coast of Phuket.

The first day of racing, January 16, will take place from Nai Yang Beach to Surin Beach. On the second day, windsurfers will compete from Surin Beach to Patong. The third day will see competition move from Patong to Kata, and the final day will bring racers from Kata to Nai Harn Beach.

Winds of between eight and 25 knots are expected to propel the windsurfers along the coast in temperatures of up to 30ºC.

Windsurfers from around the world will join local surfers for the rally.

The Phuket Gazette is the local media sponsor for the event. The organizers hope that the rally will help boost tourism to Phuket. Leading sports networks, including ESPN, Star Sports, Fox Sports and Espanol, will be broadcasting the action.

Entry for the event has already closed.

An international jury will be appointed for the competition.

The rally is being held in honor of HM King Bhumibol Adulyadej, who turned 80 years old on December 5.