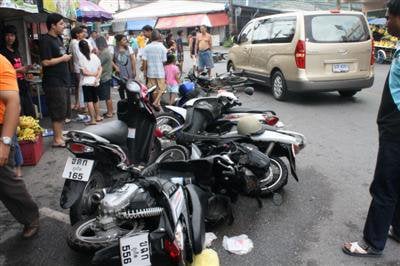 PHUKET: Like a scene out of a Hollywood action movie, an out-of-control car plowed through market stalls in the Samkong area of Phuket Town yesterday morning, leaving scores of motorbikes damaged and one woman with a broken arm.

Phuket City Police were informed of the accident at 9am.

Arriving at the scene, opposite the Dairy Hut restaurant on Hongyok U-thit Rd, they found 10 damaged motorbikes, including a Honda Wave smashed beyond repair.

A crowd of shocked onlookers surveyed the damage, which included a crashed Hyundai sedan that was later revealed to be an official vehicle of Vachira Phuket Hospital director Dr Jessada Chungpaibulpatana.

Adding to the mayhem were fruit and vegetables scattered all over the road, from stores that are normally at their busiest at that time of day.

Injured in the crash was 53-year-old Oronong Suriyawong, who was taken to hospital for treatment of a broken arm and other injuries.

About 20 meters away in the middle of the road was the vehicle that caused the damage, a Toyota Altis with a damaged windshield, radiator and hood that was still covered with fruit and vegetable matter.

The driver, 37-year-old Sutheep Rungruen of Rasada Village 6, did not try to flee the scene.

She told investigators that before the crash she had visited relatives in the area.

After starting the engine the car accelerated quickly, plowing through everything in its path.

Police think that panic and problems with her footwear getting stuck beneath the brake pedal may have been the cause.