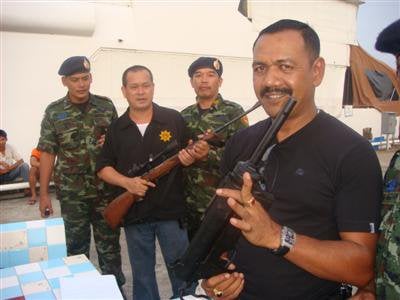 PHUKET: A man piloting a luxury yacht has been arrested by Phuket Marine Police officers after several guns and ammunition were found stashed aboard the boat he was operating.

When Marine Police boarded the Thai-registered yacht Meditation at the Customs Pier at Ao Makham, they discovered a high-powered rifle with telescopic sights, an automatic pistol, a sub-machine gun and several cases of bullets, including about 100 M16 rounds, 233 rounds of 11mm bullets and 180 rounds of 9mm bullets.

During their search of the vessel, police also discovered a receipt from Kathu Shooting Range for the purchase of 9mm bullets and a collection of paper targets. They did not, however, find any documents pertaining to ownership or registration of the weapons.

Police questioned 43-year-old captain Permsin Petsawas, who was aboard at the time. He denied having anything to do with the weapons, telling police they belonged to a friend of the yacht owner, whose name police would not reveal.

Meditation is a Thai-made boat with four decks. It measures 37 meters in length and, according to police, was being used as a charter vessel.

Mr Wu had already presented himself to police, he said.

K. Preecha told the Gazette he was serving as Mr Wu’s translator.

When asked about progress in the investigation, Lt Col Prasert said, “We must first investigate Permsin’s claim that the weapons belong to a third party and confirm whether or not that person is legally entitled to possess the weapons.”