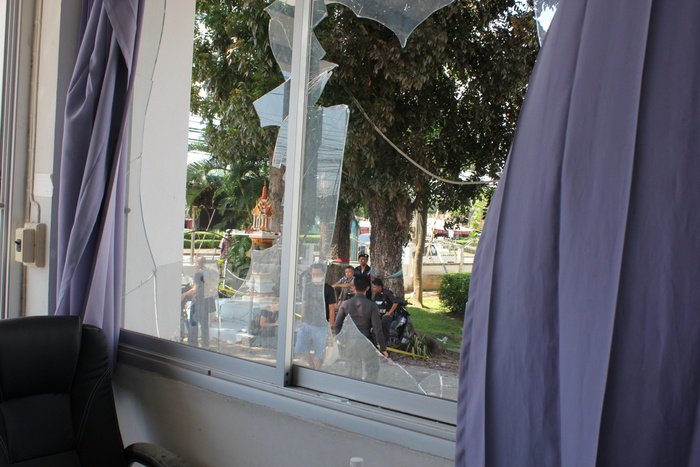 “I am sorry for the deaths of the two men; they were Phuket people. However, anyone who breaks the law must face justice. The people who set fire to the cars will not escape,” Governor Chamroen said.

Mr Patomwat and Mr Teerapong allegedly refused to be searched at a checkpoint and fled the scene. They were brought to a stop after their motorbike and a police vehicle collided. Both men were killed in the accident.

Police allegedly found 50 pills of ya ba (methamphetamine) and one kilogram of kratom leaves in the young men’s bags (story here).

“Prime Minister Gen Prayuth Chan-o-cha expressed his condolences to the families and ordered that justice to be served, both for the suspects and the authorities,” said Gov Chamroen.

Four police officers have already been transferred out of the province for the duration of the investigation, while Vice Governor Chokdee was given one month to present his results to Gov Chamroen.

Gov Chamroen was at the Thalang Police Station hours before the riots broke out, he explained at a meeting today.

“I received the report about people gathering at the police station in the afternoon and immediately went there to help with negotiations,” said Gov Chamroen. “I promised the parents that justice would be served and that we would investigate whether or not police used excessive force in their attempt to arrest the two suspects.”

Gov Chamroen explained that the parents were understanding and left the station at about 3pm. However, sometime after that, the mob became violent and started attacking the station and destroying government property.

Damage to the station has yet to be calculated, but all windows in the three-storey police building were shattered, while the fence and signpost outside were destroyed and some 27 vehicles belonging to the authorities and private owners were burned. Fourteen police officers suffered minor injuries.

The riot also forced the road outside of the station to be closed, which affected transport to Phuket Airport. Officials at the airport said 35 people missed their flights and nine planes were delayed on Saturday night (story here).

“We will investigate who is behind the mob and who pushed it to the point that people became violent,” Phuket City Police Deputy Superintendent Chaow Phomna said.

“You cannot burn down other people’s property just to get your demands met.

“Some people think they may get away with this outrageous act of violence. But they can’t. The law must be respected, and we will arrest those who violated it.”