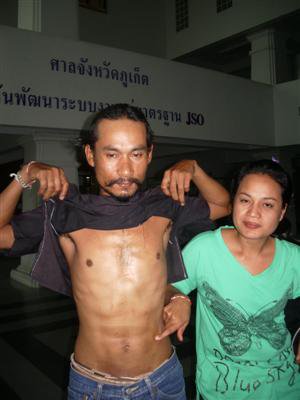 PHUKET: A Patong tuk-tuk driver charged with assault for allegedly beating a Canadian tourist has been granted bail.

Tassanarit Damthong, 30, handed himself in at Kathu Police Station at 3pm on Tuesday.

He was arrested and charged with the assault of Canadian tourist Ivan Bob Anwar, 51.

Mr Anwar claimed he was punched five times after refusing to pay 150 baht for a one-minute tuk-tuk ride from the north end of Patong to Kalim on Tuesday afternoon.

Mr Tassanarit told reporters that it was Mr Anwar who struck first.

After arriving at the destination in Kalim, opposite the Sunset Beach Resort, Mr Anwar became angry over the fare price and refused to pay, he said.

The Canadian then rudely pointed a finger in his face and kicked him in the chest, the tuk-tuk driver claimed.

Mr Tassanarit lifted his shirt for the Gazette to reveal bruising on his stomach, which he claimed to reporters was the result of Mr Anwar kicking him.

After being kicked by Mr Anwar, he retaliated and punched Mr Anwar once in the face, causing him to fall and hit his head on the tuk-tuk, he said.

Members of the Patong Tuk-Tuk “Club” who accompanied Mr Tassanarit to court yesterday said they planned to file counter charges against Mr Anwar.

Mr Anwar’s version of events was very different. He told the court yesterday that Mr Tassanarit punched him five times after he refused to pay the 150-baht fare.

Kathu Police duty officer Jongserm Preecha this morning told the Gazette Mr Anwar was at Kathu Police Station and will be charged with assault for kicking the tuk-tuk driver.

He will not be able to leave Thailand until either the case is cleared or he confesses to the assault charge and pays a fine.

Mr Anwar was due to leave Phuket at 10am today for his return trip to Tokyo, but he had to postpone the flight.