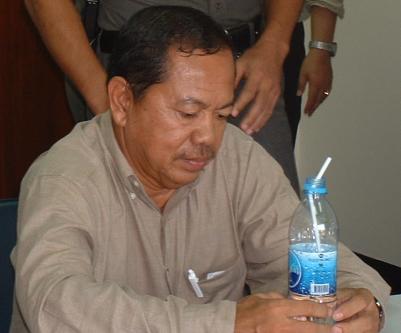 PATONG: Chamnan “Daeng” Pachantabutr, former owner of the land on which the Samsara luxury property development is being built, was arrested this morning at his home in Patong.

Chamnan is one of the owners of the Phuket Cabana Resort and of the Kan Eang restaurants in Chalong.

Producing a search warrant, the officers searched Chamnan’s house at 122 Rat-U-Thit 200 Pi Rd and seized six bankbooks, two Chanote land deeds and some items of jewelry that they believe were bought with the proceeds of the land sale.

The arrest warrant accused Chamnan of using a “flying Sor Kor 1” to register ownership of the land. This is a technique whereby a legitimate Sor Kor 1 for a piece of land is used to establish ownership of another, more valuable plot.

Other teams of officers, also armed with arrest warrants, went to the homes of two land officials, Uru Thipthep and Sanit Daengboon. Like K. Chamnan, Uru was arrested in July last year for his alleged part in falsifying the land document for the Samsara site, and subsequently bailed.

The officers found neither Uru nor Sanit at home, but seized two cars belonging to Uru, and two bankbooks. Both men are being sought by police.

This afternoon Chamnan was taken to the Samsara site and then back to Phuket City Police Station for questioning, before being released on bail of 200,000 baht.

Col Yuthaboon said that Chamnan’s arrest came after statements from arrested land officers who admitted misusing their power to issue a land document to Chamnan for the land.

Amlo, he said, would investigate where the money came from to buy the items seized from the homes of Chamnan and Uru.

“We intend to find all other property bought with this ‘dirty’ money and seize it,” he added.

Col Yuthaboon added that an application would be made to freeze bank accounts of the two men. Uru’s two cars – a BMW and a Toyota – will be taken to Bangkok tomorrow and sold. If Uru can prove that the cars were bought legitimately, he will receive the money from the sale.

Colin Mackay, Managing Director of Asia Island Homes (AIH), which is the developer of Samsara, told the Gazette, “I hope they clear it up quickly because it’s kind of a joke that it’s taking them so long to figure out if their documents are good or not. It’s taken them a year and four months so far.

“I’m no longer interested in investing any money in this island, with the way they conduct their operations. They’ve made the whole market edgy. We have attracted, directly and indirectly, nearly a billion baht to this island – that’s 2,000 baht for every man, woman and child – and with the planned public listing [of AIH] we had another billion baht contracted and ready to come in. [Thailand has] lost that.

“All our investors have lost all their money. The people who are being hit now are fourth-party to any crime that may or may not have been committed some years ago. They are totally innocent. They are in fact the perfect investors that Thailand – or any country in the world – is trying to attract.

“We’re like flies in a washing machine. We don’t know which way is up anymore.”

Eight-year tax holiday for IT companies