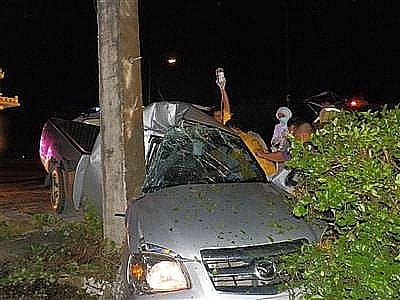 PHUKET: Two men out enjoying Phuket nightlife were injured, one seriously, when their pickup slammed into a power pole before dawn today.

Thalang Police at 1:55am were notified of an accident on Thepkrasattri Road inbound near the Karn Keha Public Housing Estate U-turn in Srisoonthorn subdistrict, Thalang.

The driver side door was caved in and the windshield was shattered and ripped away from the impact.

First responders used a knife to cut the seat belt of the passenger, Wanchai Juntharana, 27, who was rushed to Vachira Phuket Hospital for treatment of injuries including bruised ribs.

Rescue workers cut his safety belt, but also needed to use the ‘jaws of life’ metal cutters to remove him from the crumpled cab. Among his injuries were deep lacerations to his forehead.

Mr Aron was conscious throughout, but he refused efforts by rescue workers to apply an oxygen mask.

The workers said they were unsure if his recalcitrant behavior was the result of head trauma, inebriation or a combination of both.

After he was finally removed, Mr Aron was placed on a stretcher and rushed to Vachira Hospital, where he later lost consciousness, a rescue worker said.

Mr Wanchai, a resident of Rawai, said the pair were headed toward the Heroines’ Monument to join friends at a pub there when a motorcycle suddenly cut them off.

Mr Aron lost control of the vehicle in the light rain and it spun out, hitting a concrete wall and the pole, he said.

The motorbike sped off without stopping, Mr Wanchai said.