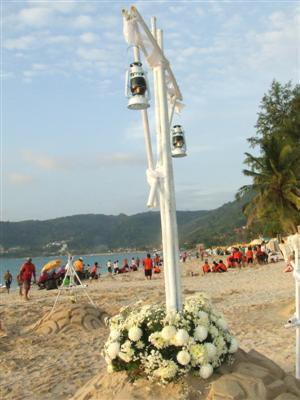 Many elected officials and high-ranking government officers attended, including Patong Mayor Pian Keesin, who was among those lucky enough to narrowly escape the waves that morning.

A one-minute period of silence followed at 10:10am, the time the first of the waves began to surge up and over Patong Beach and inundate inland areas.

At about 5pm, ‘Light up Phuket’ activities started with a concert by 140 top student musicians from nine schools playing in the Phuket Scholastic Orchestra.

After a moment of silence, candles were lit in holes in the sand and lanterns suspended by wooden supports were lit, with flowers beneath in memory of the dead.

Some people released ‘khom loy‘ floating lanterns into the sky.

Similar events took place at Kamala Beach, which was particularly badly hit, and at the Mai Khao Cemetery, where the bodies of those thought to be foreign victims were stored during the identification and repatriation process.

Even five years on, the bodies of 398 unidentified victims remain unclaimed from the Bang Maruan Cemetery in Phang Nga’s Takuapa District, where the Thai Tsunami Victim Identification (TTVI) center stored bodies of victims thought to be Thais.

The TTVI has since been renamed as the Thai Disaster Victim Identification (TDVI) center.

Its superintendent Pol Col Niti Bantuwong said photos and DNA samples are on record for all 398 corpses, but no relatives have come forward with sufficient evidence to positively identify and claim the bodies.

Relatives of 444 people contacted the agency hoping to find the remains of missing loved ones but failed to find DNA matches. Most of the the missing are now presumed to have been lost at sea.