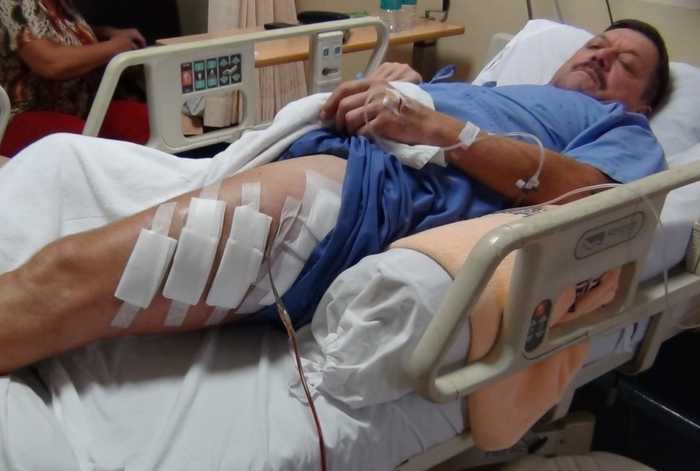 PHUKET: A Russian tourist is still in hospital after being hit by a speedboat while swimming at a Phuket beach on Wednesday.

Sergey Kuzennyy, 55, was swimming outside of a swimming zone when he was struck by the blades of a parasailing speedboat’s propeller, said Phuket Marine Office Chief Phuripat Theerakulpisut.

“I was contacted by Mr Kuzennyy and his wife to help them translate, but I was not there when the accident occurred,” Maria Lukashevich said.

“Mr Kuzennyy said that he was swimming at about 5pm on Wednesday at Kata Noi and that he had no idea that he was in an area that swimming was not allowed.

Though Marine Office staff concluded that Mr Kuzennyy was in a speedboat zone, Mr Phuripat said that he would look at what safety measures could be taken in addition to those that were implemented earlier this month.

New rules for jet-ski and parasailing operators were rubber stamped by Phuket Governor Nisit Jansomwong last week. However, the plans, which create clearly dedicated swim zones and jet-ski/boating zones, were to be enforced only in Patong before being rolled out to other areas.

“The new rules will first be enforced in Patong. We will later introduce them at Kata-Karon and other beaches in Phuket,” Governor Nisit said (story here).

Though officials have clearly delineated the zones in Patong (story here), such zones for other areas have yet to be publicly announced.

Included in the new set of rules to eventually be applied at all provincial beaches is that boats and jet-skis not approaching or departing from the beach must be operated 300m from shore.

Mr Phuripat did not elaborate on whether or not Mr Kuzennyy was swimming beyond the swim zone, or if he was swimming in a beach-approach zone.

The victim and speedboat owner are planning to settle compensation outside of the legal system and nobody is pressing charges, Lt Col Ason Jiraksa of the Karon Police told the Phuket Gazette today.

The safest place for swimmers to enjoy themselves is on sections of beach marked with red-yellow flags said Kata-Karon chief lifeguard Uten Singsom following the accident.

Phuket Poll: Do you trust the Thai police?